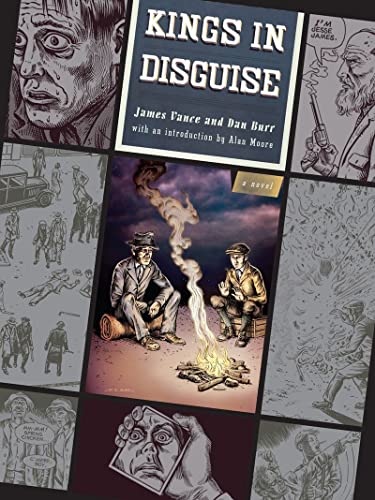 Kings in Disguise
by James Vance

Out of Stock
$34.99
inc. GST
"One of the most moving and compelling human stories to emerge out of the graphic story medium."-Alan Moore
Very Good
Only 0 left

Kings in Disguise: A Novel by James Vance

This award-winning tale, set in the height of the Great Depression, received rave reviews long before graphic novels became the phenomenon they are today. Hailed as one of the top 100 comics of all time by The Comics Journal, Kings in Disguise now reemerges as a classic. It is January 1932, and movie-loving Freddie Bloch is trading his father's liquor bottles for the cost a matinee: "Dreams were only a dime, but empty bottles [only] brought a penny apiece." When his father disappears and his brother gets arrested, Freddie finds himself homeless and adrift, trying to survive during the Detroit labor riots and amid the furor of violent, anti-communist mobs. Winner of the Eisner Award and the Harvey Award for Best New Series and an additional Eisner Award for Best Single Issue.

James Vance (1953-2017) was an American comic book writer and author of the graphic novels Kings in Disguise and On the Ropes. Dan E. Burr has been an illustrator for DC Comics's Big Book Series. He lives in Milwaukee, Wisconsin. Alan Moore is a magician and performer, and is widely regarded as the best and most influential writer in the history of comics. His seminal works include From Hell, V for Vendetta, and Watchmen, for which he won the Hugo Award. He was born in 1953 in Northampton, UK, and has lived there ever since.

GOR004266786
Kings in Disguise: A Novel by James Vance
James Vance
Used - Very Good
Paperback
WW Norton & Co
2006-04-17
208
0393328481
9780393328486
Winner of Will Eisner Award 1989
Book picture is for illustrative purposes only, actual binding, cover or edition may vary.
This is a used book - there is no escaping the fact it has been read by someone else and it will show signs of wear and previous use. Overall we expect it to be in very good condition, but if you are not entirely satisfied please get in touch with us.