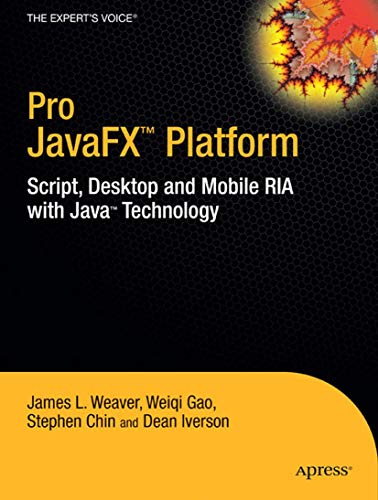 The JavaFX (TM) technology and platform is essentially Sun's response to Adobe Flash and Microsoft's Silverlight. JavaFX lets developers play with the open-source scripting, desktop, and mobile APIs offered to create dynamic, seamless visual user interfaces (UIs) that are "Flash-like" and beyond...

This book contains the following:

Visit projavafx.com for more resources and information from the authors.

Jim Weaver is an author, speaker, teacher, and developer in rich Internet application technologies such as JavaFX, and may be contacted at jim.weaver@javafxpert.com.
GOR005065806
9781430218753
1430218754
Pro JavaFX (TM) Platform: Script, Desktop and Mobile RIA with Java (TM) Technology by James Weaver
James Weaver
Used - Very Good
Paperback
Springer-Verlag Berlin and Heidelberg GmbH & Co. KG
2009-07-18
568
N/A
Book picture is for illustrative purposes only, actual binding, cover or edition may vary.
This is a used book - there is no escaping the fact it has been read by someone else and it will show signs of wear and previous use. Overall we expect it to be in very good condition, but if you are not entirely satisfied please get in touch with us
Trustpilot