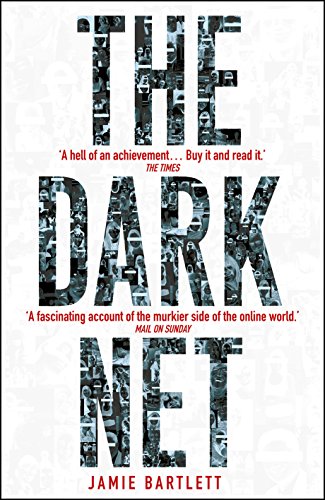 The Dark Net
by Jamie Bartlett

In Stock
$16.49
inc. GST
The Dark Net is just a click away. Based on extensive first-hand experience, exclusive interviews and shocking documentary evidence, The Dark Net offers a startling glimpse of human nature under the conditions of freedom and anonymity, and shines a light on an enigmatic and ever-changing world.
Very Good Good
26 in stock

The Dark Net by Jamie Bartlett

The Dark Net is just a click away. Beyond the familiar online world that most of us inhabit lies a vast network of sites, communities and cultures where freedom is pushed to its limits. A world that is as creative and complex as it is dangerous and disturbing. A world that is much closer than you think. The Dark Net is a revelatory examination of the internet today, and of its most innovative and dangerous subcultures, stretching from secret Facebook groups to the encrypted and hidden Tor network. In it, Bartlett goes in search of the people behind the screen, meeting trolls and pornographers, drug dealers and hackers, political extremists and computer scientists, Bitcoin programmers and self-harmers, libertarians and vigilantes. Based on extensive first-hand experience, exclusive interviews and shocking documentary evidence, The Dark Net offers a startling glimpse of human nature under the conditions of freedom and anonymity, and shines a light on an enigmatic and ever-changing world.

"A fascinating and disturbing journey through the furthest recesses of the Internet. Jamie Bartlett is an expert guide... he shines an invaluable light on a world that remains determinedly opaque." -- Ian Burrell * Independent *
"A hell of an achievement... Buy it and read it." -- Hugo Rifkind * The Times *
"Eye-opening ... Bartlett is an informal yet informed guide ... As befits a cross-party intellectual, he minimizes binary distinctions, conveying instead a mixture of conservative disquiet and liberal tolerance. The tales he tells are exemplary, titillating and sometimes frightening" * Times Literary Supplement *
"Bartlett anatomises the usual bogeymen and demonstrates that they're real.The Dark Net is, for anyone engaged with the web and the effects it is having on our culture, necessary reading... a flashlight in a dark, dark cellar." -- Michael Bywater * Spectator *
"A fascinating and disturbing exploration of the outer edges of the internet and the human mind." -- Josh Cohen
"[A] thorough and assiduously researched account of the deviantly erotic, subversive and criminal aspects of web life." -- Bryan Appleyard * Sunday Times *
"A confident and well-informed guide... By meeting the people behind the online activity, Bartlett humanises it." -- Douglas Heaven * New Scientist *
"The Dark Net offers smart, provoking reportage from the crooked crannies of digital culture, married to a quietly impressive analysis of how technology is amplifying both the best and the worst of us. Required reading for anyone looking to escape media hysteria and get to grips with the 21st century's most compelling, discomforting complexities." -- Tom Chatfield
"A picturesque tour of this disquieting netherworld... the darkest recesses of the internet, for better and for worse, and being illuminated." -- Sue Halpern * The New York Review of Books *
"A judgement-free look at the mechanics of trolling and other internet bad behaviour and generates more light than heat." -- Helen Lewis * New Statesman, Books of the Year *
"Reveals a hidden, seedy world where people lurk behind pseudonyms and dupe others into revealing their bodies on camera to be used against them in public shaming. If you're shocked to discover that last year approximately 20 per cent of drug users bought their stash online, you'll find this fascinating. Bartlett is an able guide on a journey through the margins of the web." -- Max Wallis * Independent, Books of the Year *
"A well-researched book, studded with enlightening interviews" * Mail on Sunday *
"A gripping read, more thrilling and chilling than many a fictional tale of the digital could ever be." * Sciencebase *
"The book's great contribution is non-sensationalist reporting about very touchy subjects. If we're going to keep making laws about this stuff, we need this kind of sanity." * ZDNet *
"This book ticks all of my boxes: fascinating subcultural studies, a brave nosedive into often scary worlds, and a pacey writing style that makes you think you're reading a good thriller. I recommend this book to anyone who wants to know what the depths of human depravity look like, but can't get the time off work to find out for themselves." * Left Foot Forward *

Jamie Bartlett is the bestselling author of The Dark Net, Radicals Chasing Utopia: Inside the Rogue Movements Trying to Change the World and The People Vs Tech, which was longlisted for the 2019 Orwell Prize for Political Writing and won the 2019 Transmission Prize. He is the Director of the Centre for the Analysis of Social Media at the think-tank Demos. He also writes on technology for the Spectator, the Telegraph and for several other publications on how the internet is changing politics and society. In 2017 Jamie presented the two-part BBC TWO documentary series The Secrets of Silicon Valley. He lives in London.

GOR006783966
The Dark Net by Jamie Bartlett
Jamie Bartlett
Used - Very Good
Paperback
Cornerstone
2015-03-12
320
0099592029
9780099592020
N/A
Book picture is for illustrative purposes only, actual binding, cover or edition may vary.
This is a used book - there is no escaping the fact it has been read by someone else and it will show signs of wear and previous use. Overall we expect it to be in very good condition, but if you are not entirely satisfied please get in touch with us.