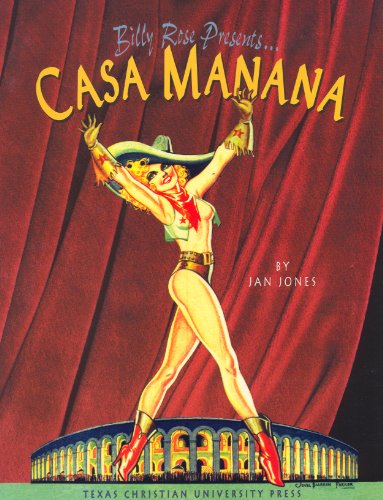 In 1936 as Texas prepared to celebrate its centennial--100 years after the Battle of San Jacinto--Dallas was chosen as the site of the official exhibition. Plans were under way for a modest Frontier Days Celebration in Fort Worth--until Star-Telegram publisher and civic booster Amon G. Carter stepped in. Carter considered the naming of Dallas as the official site a gross miscarriage of justice and was determined to get even by mounting a show that would directly rival the official event--and pull tourist dollars into Fort Worth. To put his celebration together Carter hired flamboyant Broadway producer Billy Rose. The result was Fort Worth's Frontier Centennial, an improbable conglomeration of agricultural exhibits, sideshow nudes, an old-time Wild West show, Rose's musicalized circus Jumbo, and a parade of Broadway and vaudeville talent led by feature artiste, stripper Sally Rand.

The centerpiece for this extravaganza was the dinner theater, Casa Manana, with the world's largest revolving stage surrounded by a tank of water on which it seemed to float, over twenty fountains, and geysers of water that shot into the air at strategic intervals. The building featured over thirty Spanish-style arches, was 320 feet in length, and contained the world's longest bar, a fact of which Rose was inordinately proud.

But it was the revue on this magnificent stage that truly made theatrical history. On opening night, Paul Whiteman raised his baton and two bands swung into the fanfare. There were interpretations of the St. Louis World's Fair, the Paris Exposition of 1925, and Chicago's 1933 Century of Progress Exposition. Texas "Sweetheart Number One" wore a $5,000 gold-mesh gown, and Sally Rand wore only a huge opaline balloon. On opening night when the orchestra played "The Eyes of Texas," the audience rose to its feet singing, whistling, and cheering. "Texans," wrote one critic, "are not given to polite applause."

The Frontier Centennial and its sequel, the Frontier Fiesta, closed after only two brief seasons (1936 and 1937), the second season cut short by controversy and lawsuits. Rose left Fort Worth under a cloud, informed by city fathers that his services were no longer needed. Undaunted, he went on to become a multimillionaire with almost legendary status as a theatrical producer.

But Fort Worth was never again the same after the Frontier Centennial . . . and memories of that festival linger today, even though the buildings were long ago razed.

Today a permanent theater-in-the-round, appropriately named Casa Manana, is located on the centennial grounds. Popular with Fort Worthians, it can only echo the splendor of the original.

Jan Jones is a Fort Worth native who has taught theater and English in the Metroplex for almost thirty years. Her interest in Casa Manana began in 1980 when she wrote her master's thesis on the current theater-in-the-round. This is her first book.

GOR010184922
Billy Rose Presents...Casa Manana by Jan Jones
Jan Jones
Chisholm Trail
Used - Very Good
Paperback
Texas Christian University Press,U.S.
1999-08-30
160
0875652018
9780875652016
N/A
Book picture is for illustrative purposes only, actual binding, cover or edition may vary.
This is a used book - there is no escaping the fact it has been read by someone else and it will show signs of wear and previous use. Overall we expect it to be in very good condition, but if you are not entirely satisfied please get in touch with us.