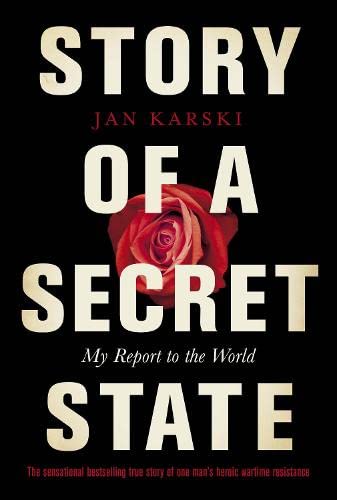 Story of a Secret State: My Report to the World
by Jan Karski

In Stock
$11.99
+10% GST
During the first four years of World War II, Jan Karski worked as a messenger for the underground, risking his life in secret missions. He was captured, tortured, rescued, smuggled through a tunnel into the Warsaw. This is a memoir of Karski which is a courageous testimony of a man who risked everything for his country.
Very Good
Only 3 left

Story of a Secret State: My Report to the World Summary

Story of a Secret State: My Report to the World by Jan Karski

'I do not pretend to have given an exhaustive picture of the Polish Underground, its organization and its activities.Because of our methods, I believe that there is no one today who could give an all-embracing recital...This book is a purely personal story, my story.'

Jan Karski's 1944 war memoir is a heroic act of witness: the courageous testimony of a man who risked everything for his country. At times overwhelming in the details it reveals of the suffering of ordinary people, it is an unforgettable and deeply affecting record of brutality, courage, and survival under conditions of extreme bleakness. During the first four years of World War II, Karski worked as a messenger for the underground, risking his life in secret missions. He was captured, tortured, rescued, smuggled through a tunnel into the Warsaw ghetto and, finally, disguised himself as a guard to infiltrate a Nazi death camp. Then, travelling across occupied Europe to England, with his eye-witness report smuggled on microfilm in the handle of a razor, he became the first man to tell the Allies about the Holocaust - only to be ignored.

Story of a Secret State: My Report to the World Reviews

Jan Karski's Story of a Secret State stands in the absolute first rank of books about the resistance in World War II. If you wish to read about a man more courageous and honorable than Jan Karski I would have no idea who to recommend. Yes, it's that good. -- Alan Furst
It deserves its status as a Penguin Classic, not only because it is a great historic document, but also because it's a cracking good read: Karski's adventures are worthy of the wildest spy thriller -- Nigel Jones * Telegraph *
His account of his missions is an electrifying tale of false identities, near captures, spies and secret film capsules ... in human terms, Karski's account is invaluable -- Frank Trentmann * Daily Express *
Story of a Secret State is now viewed as a classic insider's account of the Resistance in occupied Europe...After all the harrowing descriptions of Holocaust horrors there have been over the years from survivors of Auschwitz, Belsen, and Ravensbruck, Karski's vivid account of what he saw back in 1942 is still deeply moving. We feel his shock and incredulity that this could really be happening in 20th century 'civilised' Europe. -- Tony Rennell * Daily Mail *
The bravery of the man who risked all to tell the world about the Holocaust is truly staggering ... an extraordinary testament to Man's inhumanity to Man, and the even more remarkable courage required to resist it -- Ben McIntyre * The Times *
Karski's exploration of the moral fog in which he and his colleagues operated ... made me recall thrillers like Man Hunt and Hangmen Also Die ... two episodes resemble scenes tantalisingly directed by Hitchcock ... Karski's account of the systematic brutality of the Nazi regime is literally chilling -- Peter Conrad * The Observer *
Reads like the screenplay to an incredibly exciting war movie - but it is all true -- Andrew Roberts
Seared with an urgency that pitches the reader into the heart of the horror -- Ben Felsenburg * Metro *
His story deserves not just revival but reflection ... Karski's electrifying words still speak only too eloquently for themselves -- Marek Kohn * Independent *

Karski was his nom de guerre; he had been born Jan Kozielewski, the youngest of eight children, in Lodz, Poland's second-largest city, on 24 June, 1914. Karski was a liaison officer of the Polish underground, who infiltrated both the Warsaw Ghetto and a German concentration camp and then carried the first eyewitness accounts of the Holocaust to a mostly disbelieving Anthony Eden and Franklin Roosevelt.

GOR002660606
Story of a Secret State: My Report to the World by Jan Karski
Jan Karski
Penguin Modern Classics
Used - Very Good
Hardback
Penguin Books Ltd
2011-05-05
464
0141196661
9780141196664
N/A
Book picture is for illustrative purposes only, actual binding, cover or edition may vary.
This is a used book - there is no escaping the fact it has been read by someone else and it will show signs of wear and previous use. Overall we expect it to be in very good condition, but if you are not entirely satisfied please get in touch with us.