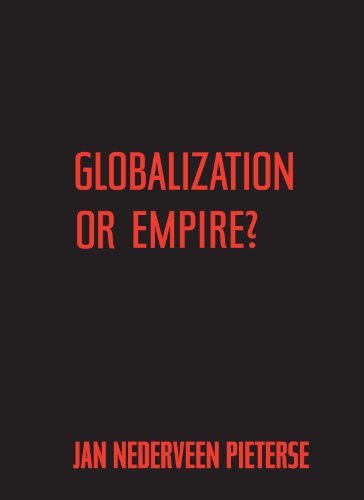 Out of Stock
$18.49
inc. GST
Is America's cultural, economic and military domination of the world globalization, or is it just empire? In this smart, brief book, Pieterse confronts many of the most important issues surrounding this question.
Very Good
Only 0 left

In this smart and concise examination of the trends driving contemporary globalization, Jan Nederveen Pieterse argues that the United States' pursuit of global primacy is based upon a complex melding of neoliberal economics and hegemonic politics. Do alternate capitalisms offer viable alternatives to the American way? Globalization or Empire? looks at globalization with acuity and thoughtfulness and uncovers its underlying dramas.

"American empire stalks the globe, but what kind of empire is it? What is the relationship between this empire and globalization? Does the Bush administration offer a monstrous hybrid of the logics of capital and war? Nederveen Pieterse's book takes on these pressing, heady questions and offers provocative and compelling answers. "Globalization or Empire? is a magisterial primer on the history of the present. A tour de force!."
-Michael Watts, Director, Institute of International Studies, UC Berkeley
"Provocative and insightful as always, Jan Nederveen Pieterse unravels the many dimensions of corporate-driven globalization, particularly its links with empire and American hyperpower. Nederveen Pieterse is indispensable in helping us understand the meaning of recent global developments like Washington's aggressive unilateralism and the emergence of the vast and diverse anti-globalization movement.."
-Walden Bello, Director of Focus on the Global South, Professor of Sociology, University of the Philippines and author of "Deglobalization
"As the project of economic globalization gets superimposed with the imperial 'Project for a New American Century' and a unipolar world seems inevitable, Nederveen Pieterse's "Globalization or Empire? provides a helpful roadmap to explore how the two projects of contemporary domination are related yet different, and how the exercise of unrestrained power has the seeds of self-destruction built into it. This is an important book for all those seeking a coherent, intelligent and hopeful path out of the economic and political mess we find ourselves in.."
-Vandana Shiva, Director of the Research Foundation for Science Technology & Ecology, NewDelhi
"Nederveen Pieterse asks us to think rigorously about terms like neo-liberalism, globalization, empire and imperialism and to ground our analysis of contemporary international economics and politics in clear concepts, attention to real mechanisms and hard evidence. His book is a valuable guide to a very wide range of literature on contemporary international dynamics. Those wishing to get to the heart of the big contemporary international issues should buy this book.."
-Peter Gowan, London Metropolitan University

Jan Nederveen Pieterse is Professor of Sociology at the University of Illinois Urbana-Champaign, co-editor of the Review of International Political Economy and author of Globalization and Culture and Empire and Emancipation.

GOR010252164
Globalization or Empire? by Jan Nederveen Pieterse
Jan Nederveen Pieterse
Used - Very Good
Paperback
Taylor & Francis Ltd
2004-03-16
208
0415948495
9780415948494
N/A
Book picture is for illustrative purposes only, actual binding, cover or edition may vary.
This is a used book - there is no escaping the fact it has been read by someone else and it will show signs of wear and previous use. Overall we expect it to be in very good condition, but if you are not entirely satisfied please get in touch with us.