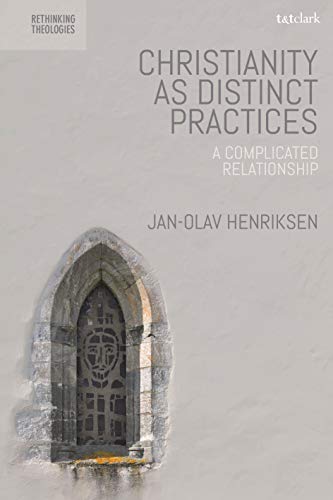 A Christianity as Distinct Practices Summary

Jan-Olav Henriksen reconstructs and analyzes Christianity as a cluster of practices that manifest a distinct historically and contextually shaped mode of being in the world. Henriksen suggests that these practices imply a complicated relationship between the tradition in which they originate, the community that emerges from and is constituted by that tradition, and the individuals who appropriate the tradition that these communities mediate through their practices. Thus, to think of Christianity simply in terms of belief is misleading and represents an underdetermination of its distinct character. Henriksen further argues this relationship needs to be described primarily as practices aimed at orientation and transformation. His analysis points to Christianity's similarity to other religions in regard to the functional or pragmatic dimensions it displays. Examining facets such as prayer, the use of scripture, preaching and doctrine, Henriksen emphasizes that the element that makes a practice distinctively Christian is how it relates to and is informed by the Jesus story.

A Christianity as Distinct Practices Reviews

Using 'practices' as its focus, this book explores the nature of Christian religion in new ways, such as its embodied, material, social and everyday character. Above all it convincingly argues how a practice-oriented account not only makes sense of, but also presupposes, core elements and narratives of Christian tradition as that which makes Christian practices meaningful. This provides for a convincing argument about its constructive potential for theology. * ULLA SCHMIDT, AARHUS UNIVERSITY, DENMARK *
In a context where the practices of the Church have become a central concern, Jan-Olav Henriksen offers a nuanced and provocative contribution from the Philosophy of Religion of this fast developing field. This book will be an enduring resource and dialogue partner for all of those who are setting out on the complicated enterprise of using theological ethnography as a means to study the lived practices of the Christian community. * PETE WARD, DURHAM UNIVERSITY, UK *

Jan-Olav Henriksen is Professor of Philosophy of Religion in MF Norwegian School of Theology, Religion and Society, Norway, and Professor of Contemporary Religion at Agder University, Norway.

Acknowledgments INTRODUCTION Part I THEORY FOR UNDERSTANDING CHRISTIANITY AS PRACTICE 1. RELIGION AS ORIENTATION, TRANSFORMATION, AND LEGITIMIZATION OF HUMAN PRACTICES IN EVERYDAY LIFE 2. LIVED RELIGION INSTEAD OF RELIGION AS BELIEF 3. PRACTICES OF ORIENTATION AND TRANSFORMATION ARE SOCIAL PRACTICES 4. HOW FOCUS ON PRACTICES MAY RESHAPE PHILOSOPHY OF RELIGION 5. TO ACCESS THE WORLD AS WORLD: SEMIOSIS 6. RITUAL PRACTICES AS COGNITIVE PROSTHETICS 7. IN CONCLUSION Part II CHRISTIANITY RECONSTRUCTED: CLUSTERS OF PRACTICES SHAPED BY A STORY 8. (HI-)STORY AS RESOURCE FOR ORIENTATION AND TRANSFORMATION 9. THE CONTENT OF THE STORY: WHAT JESUS PRACTICED AS THE BASIS FOR (ECCLESIOLOGICAL) PRACTICE 10. A MORAL COMMUNITY THAT STEWARDS THE ABUNDANT GIFTS OF GOD 11. PRAYER AS MEANS OF TRANSFORMATION AND ORIENTATION: THE EXAMPLE OF THE LORD'S PRAYER 12. A REINTERPRETATION OF THE SCRIPTURES AND THE CONCRETE USE OF SCRIPTURE IN THE CHURCH 13. PREACHING AS A CONTEMPORARY PRACTICE: BETWEEN COMMUNICATIVE AND STRATEGIC ACTION 14. COMMEMORATION OF JESUS'S PRACTICES: OPENNESS TOWARD BOTH PAST AND FUTURE 15. PUZZLES FOR ORIENTATION: SUFFERING, DEATH, AND RESURRECTION 16. A THEOLOGICAL CONCLUSION: HOW TO PRACTICE "GOD"? 17. IS CHRISTIANITY A RELIGION? ARE BELIEF AND DOCTRINE OPPOSED TO PRACTICE? 18. CONCLUSION Bibliography Index

GOR010333893
A Christianity as Distinct Practices by Jan-Olav Henriksen (MF Norwegian School of Theology, Norway)
Jan-Olav Henriksen (MF Norwegian School of Theology, Norway)
Rethinking Theologies: Constructing Alternatives in History and Doctrine
Used - Very Good
Hardback
Bloomsbury Publishing PLC
2019-01-10
216
0567683273
9780567683274
N/A
Book picture is for illustrative purposes only, actual binding, cover or edition may vary.
This is a used book - there is no escaping the fact it has been read by someone else and it will show signs of wear and previous use. Overall we expect it to be in very good condition, but if you are not entirely satisfied please get in touch with us.