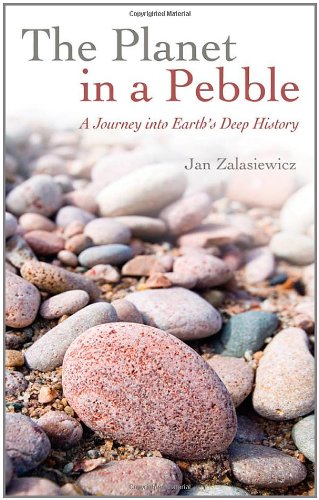 The Planet in a Pebble
by Jan Zalasiewicz (Professor of Palaeobiology, University of Leicester)

In Stock
$17.99
+10% GST
In this narrative of the Earth's long and dramatic history, Jan Zalasiewicz shows how many events in the Earth's ancient past can be deciphered from a single pebble. He explores how geologists reach deep into the past by forensic analysis of even the tiniest amounts of mineral matter, demonstrating and revealing Earth's extraordinary story.
Very Good
Only 1 left

The Planet in a Pebble Summary

The Planet in a Pebble: A journey into Earth's deep history by Jan Zalasiewicz (Professor of Palaeobiology, University of Leicester)

This is the story of a single pebble. It is just a normal pebble, as you might pick up on holiday - on a beach in Wales, say. Its history, though, carries us into abyssal depths of time, and across the farthest reaches of space. This is a narrative of the Earth's long and dramatic history, as gleaned from a single pebble. It begins as the pebble-particles form amid unimaginable violence in distal realms of the Universe, in the Big Bang and in supernova explosions and continues amid the construction of the Solar System. Jan Zalasiewicz shows the almost incredible complexity present in such a small and apparently mundane object. Many events in the Earth's ancient past can be deciphered from a pebble: volcanic eruptions; the lives and deaths of extinct animals and plants; the alien nature of long-vanished oceans; and transformations deep underground, including the creations of fool's gold and of oil. Zalasiewicz demonstrates how geologists reach deep into the Earth's past by forensic analysis of even the tiniest amounts of mineral matter. Many stories are crammed into each and every pebble around us. It may be small, and ordinary, this pebble - but it is also an eloquent part of our Earth's extraordinary, never-ending story.

The Planet in a Pebble Reviews

Extraordinary book. Times Literary Supplement I have rarely learned so much in so few pages, and this book...has the making of a minor classic. Geographical It builds to a satisfying picture of how our planet's history is etched into every fragment of the pebble. New Scientist Impressively skilful narrative...Geology has a gifted new popular science writer. New Scientist

About Jan Zalasiewicz (Professor of Palaeobiology, University of Leicester)

Jan Zalasiewicz is a Lecturer in Geology at the University of Leicester, before that working at the British Geological Survey.

GOR003209477
The Planet in a Pebble: A journey into Earth's deep history by Jan Zalasiewicz (Professor of Palaeobiology, University of Leicester)
Jan Zalasiewicz (Professor of Palaeobiology, University of Leicester)
Oxford Landmark Science
Used - Very Good
Hardback
Oxford University Press
2010-09-23
256
0199569703
9780199569700
N/A
Book picture is for illustrative purposes only, actual binding, cover or edition may vary.
This is a used book - there is no escaping the fact it has been read by someone else and it will show signs of wear and previous use. Overall we expect it to be in very good condition, but if you are not entirely satisfied please get in touch with us.