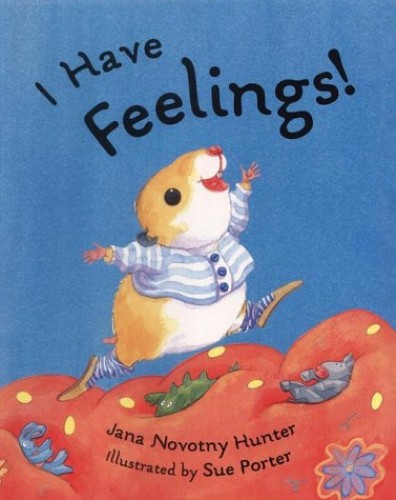 I Have Feelings!
by Jana Novotny-Hunter

Out of Stock
$27.99
inc. GST
An essential book for helping young children express their emotions.
Very Good
Only 0 left

I Have Feelings! Summary

I Have Feelings! by Jana Novotny-Hunter

A delightful book for the very young, exploring all the different feelings of a little hamster and how his emotions change with the various experiences of the day, from proud to excited, brave, angry, scared until finally his daddy hugs him goodnight, and he feels love. I Have Feelings! is an invaluable way to teach young children about emotions, both positive and negative, and to help them understand and articulate them. The hamster is an endearing character, and his behaviour echoes that of a typical toddler, enabling small children to identify with all his different feelings.

Jana Novotny-Hunter is a graduate of Hornsey College of Art and has been writing and teaching children's literature for over 25 years. In 1993 she opened Bear Studios with the author/illustrator Sue Porter. Among her many previous books is Deaf City War, for which she won the Judy Blume Award.

Sue Porter has designed, illustrated, contributed to and often written around 60 children's books, all of which share a gentle warmth and humour. Her previous titles include Hepzibah, which was runner-up for the Mother Goose Award, and One Potato which won the Owl Award in Japan, and the Prix Verselle in France.

GOR003118365
I Have Feelings! by Jana Novotny-Hunter
Jana Novotny-Hunter
Used - Very Good
Paperback
Frances Lincoln Publishers Ltd
2002-09-05
32
0711217343
9780711217348
N/A
Book picture is for illustrative purposes only, actual binding, cover or edition may vary.
This is a used book - there is no escaping the fact it has been read by someone else and it will show signs of wear and previous use. Overall we expect it to be in very good condition, but if you are not entirely satisfied please get in touch with us.