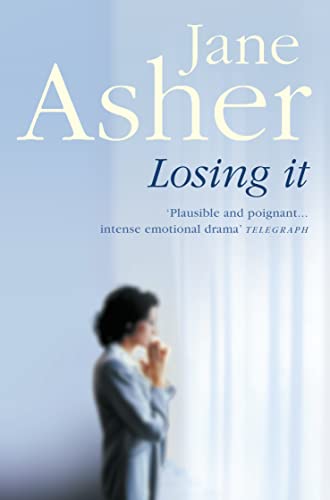 Losing It
by Jane Asher

A man who has everything, a girl who has nothing, and a woman who has to fight to keep what's hers. Everyone has something to lose...

Losing It by Jane Asher

A man who has everything, a girl who has nothing, and a woman who has to fight to keep what's hers. Everyone has something to lose...

Judy Thornton thinks her husband must be losing his mind. How has Charlie's casual friendship with the fat, lonely girl in the local supermarket, become an obsession that turns the mild, bumbling barrister into an unpredictable stranger?

Stacey Salton needs to lose half her bodyweight. Until then she can't begin to live, and she'll do anything, and use anyone, to succeed.

Suddenly, in the chaos that turns the Thornton family upside-down, it's Judy who has everything to lose...

In this compassionate and compelling story no one remains unaffected - and it takes some surprising revelations to help them see what you have to lose in order to win.

`[A] finely-observed portrait of a family under stress, narrated from all sides, provides a convincing backdrop for a tale of obsession.' Sunday Mirror

`Asher has chosen, in Losing It, to make each character speak directly... We therefore meet them on their own terms, with their own vanities, faults and excuses. It is extremely well done.' Country Life

Jane Asher's first novel, The Longing, was published to great acclaim in 1996, as was her second, The Question, in 1998. Celebrated British actress of stage and small screen, she is also well known for her many other activities, especially her books and journalism and her successful cake-making business. She lives in London with her husband and three children.

GOR003026878
Losing It by Jane Asher
Jane Asher
Used - Very Good
Paperback
HarperCollins Publishers
2003-05-06
304
0006513298
9780006513292
N/A
Book picture is for illustrative purposes only, actual binding, cover or edition may vary.
This is a used book - there is no escaping the fact it has been read by someone else and it will show signs of wear and previous use. Overall we expect it to be in very good condition, but if you are not entirely satisfied please get in touch with us.