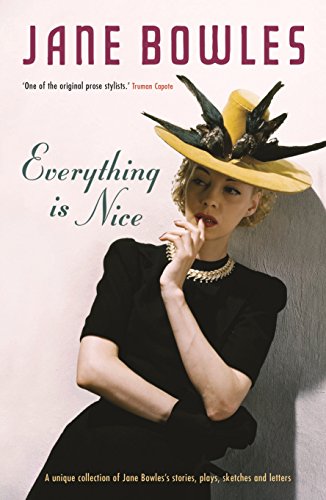 Everything is Nice
by Jane Bowles

Used Price
$34.99
inc. GST
Free Shipping in Australia
Jane Bowles wrote very little: just one perfect novel, "Two Serious Ladies", a play, the "Summer House", and the dozen or so stories. But it was enough to establish a reputation as one of the twentieth century's most original fiction writers. This edition of Jane Bowles' stories comes with a biographical note and photos.
Like New Very Good

Everything is Nice Summary

Everything is Nice: Collected Stories, Fragments and Plays by Jane Bowles

Jane Bowles wrote very little: just one perfect novel, Two Serious Ladies, a play, In the Summer House, and the dozen or so stories collected in this volume. But it was enough to establish a reputation as one of the twentieth century's most original fiction writers. From the title story where an American woman is led to a house in a 'blue moslem town' by a veiled woman with porcupines in her basket, to Camp Cataract, a Colorado-based tour de force of middle-class claustrophobia and dread, Everything is Nice takes you into an edgy and exhilarating, tragicomic world. This beautifully produced volume includes all of Jane Bowles's stories, together with the fragments of two further novels, and three stories that originally formed a part of Two Serious Ladies, before the book was edited by Paul Bowles. The book also includes the full text of In the Summer House, and two other short plays, A Quarelling Pair and At the Jumping Bean. Together with Two Serious Ladies, it represents Jane Bowles's complete fictional output.

Everything is Nice Reviews

Readers who've not yet read Jane Bowles are almost to be envied, like people who've still to read Austen or Mansfield or Woolf, and have all the delight, the literary satisfaction, the shock of classic originality, the revelation of such good writing, still to come. -- Ali Smith
No other writer can consistently produce surprise of this quality, the surprise that is the one essential ingredient of great art. Jane Bowles deals almost exclusively in this rare commodity -- John Ashberry

Jane Bowles (born Jane Auer, 1917) grew up in New York City, where as a teenager she became part of a bohemian, bisexual scene, along with the writer Paul Bowles. The pair married in 1938, somewhat impulsively, as both primarily pursued same-sex relationships. They were nonetheless devoted companions, living in Tangier, Morocco, in adjoining apartments. At the age of 40, Jane Bowles suffered a debilitating stroke, which brought an early end to her writing. She died in 1973.

GOR010756526
Everything is Nice: Collected Stories, Fragments and Plays by Jane Bowles
Jane Bowles
Used - Like New
Paperback
Sort of Books
2012-12-06
426
1908745150
9781908745156
N/A
Book picture is for illustrative purposes only, actual binding, cover or edition may vary.
The book has been read, but looks new. The book cover has no visible wear, and the dust jacket is included if applicable. No missing or damaged pages, no tears, possible very minimal creasing, no underlining or highlighting of text, and no writing in the margins.