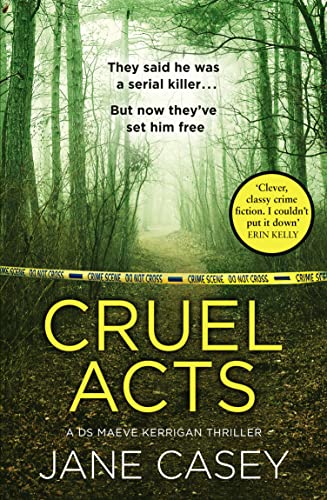 From award-winning author Jane Casey comes a powerful Maeve Kerrigan crime thriller which will keep you on the edge of your seat until the final page!

The Sunday Times bestseller and winner of the 2019 Irish Independent crime fiction book of the year!

From award-winning author Jane Casey comes a powerful Maeve Kerrigan crime thriller which will keep you on the edge of your seat until the final page!

How can you spot a murderer?


Leo Stone is a ruthless killer - or the victim of a miscarriage of justice. A year ago, he was convicted of the murder of two women and sentenced to life in prison. But now he's free, and according to him, he's innocent.

DS Maeve Kerrigan and DI Josh Derwent are determined to put Stone back behind bars where he belongs, but the more Maeve finds out, the less convinced she is of his guilt.

Then another woman disappears in similar circumstances. Is there a copycat killer, or have they been wrong about Stone from the start?

'I adored this book' Liz Nugent

'Kept me turning the pages long into the night' Rachel Abbott

'Cruel Acts is magnificent...I could not stop reading it! Utter brilliance' Marian Keyes

'You'll be checking the locks and looking over your shoulder after reading this one...clever, classy crime fiction with a conscience' Erin Kelly

'One of the most authentic police procedural writers around' Jo Spain, bestselling author of The Confession

'A compulsive read. The story is captivating' Patricia Gibney, author of the Detective Lottie Parker series

'An utterly engaging, powerful novel that had me hooked from page one' Helen Fields, author of Perfect Remains

'Kept me turning the pages long into the night' Rachel Abbott, author of the Tom Douglas thriller series

'The plot makes for a breathtaking page-turner' Sun

'This brutal thriller doesn't pull its punches, and it hooks till the last gasp' Heat

Jane Casey is no stranger to the crime world. Married to a criminal barrister, she's got the inside track on some of the country's most dangerous offenders, giving her writing an unsettlingly realistic feel.

This authenticity has made her novels international bestsellers and critical successes. They have been nominated for several awards and in 2015 Jane won both the Mary Higgins Clark Award and Irish Crime Novel of the Year for The Stranger You Know and After the Fire, respectively. She is also an active member of Killer Women, a London-based group of crime writers.

Born in Dublin, Jane now lives in southwest London with her husband and two children.

GOR009851083
Cruel Acts (Maeve Kerrigan, Book 8) by Jane Casey
Jane Casey
Maeve Kerrigan
Used - Very Good
Hardback
HarperCollins Publishers
2019-04-15
368
0008149038
9780008149031
N/A
Book picture is for illustrative purposes only, actual binding, cover or edition may vary.
This is a used book - there is no escaping the fact it has been read by someone else and it will show signs of wear and previous use. Overall we expect it to be in very good condition, but if you are not entirely satisfied please get in touch with us.