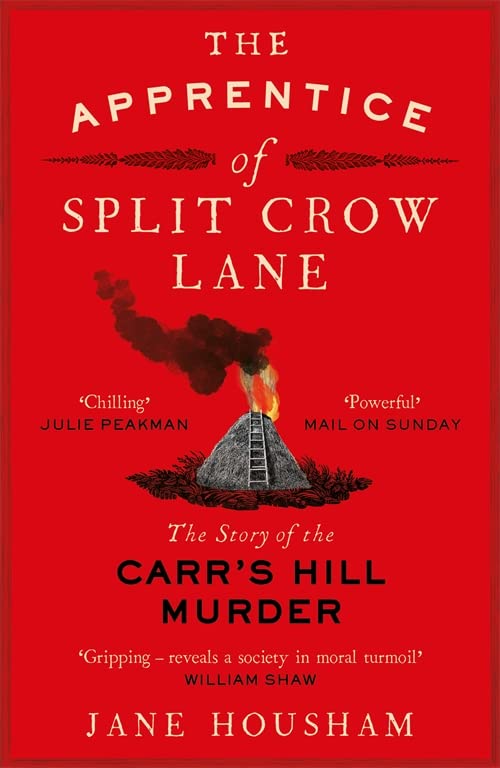 The Apprentice of Split Crow Lane by Jane Housham

The investigation into a Gateshead child murder reveals the Victorians - their classes, their justice and their scandals - as never before

The Apprentice of Split Crow Lane: The Story of the Carr's Hill Murder by Jane Housham

The Apprentice of Split Crow Lane takes the forgotten case of a child murder in 1866 as a springboard to delve deeply into the pysche of the Victorians. What Jane Housham finds, in this exploration of guilt, sexual deviance and madness, is a diagnosis that is still ripe for the challenging and a sentence that provokes even our liberal modern judgement.

Set around Gateshead, it is a revelatory social history of the North - an area growing in industry and swelling with immigration, where factory workers are tinged blue and yellow by chemicals, the first tabloids are printed, children are left alone by working parents and haystack fires sweep the county in rebellion against the introduction of the police force. Into this landscape, a five-year-old Irish girl named Sarah Melvin sets out over the fell to look for her father, and a troubled young man makes a frightening leap of logic to save his own skin.

Told here for the first time, this is an extraordinary story of sexual deviance and murder. In lively, empathic prose, Jane Housham explores psychiatry, the justice system and the media in mid-Victorian England to reveal a surprisingly modern state of affairs.

Gripping - reveals a society in moral turmoil * William Shaw *
Well-written and excellently researched, this chilling tale of a Victorian sex murder opens out into an investigation into the workings of the lunatic mind and the asylums which treat it * Julie Peakman *
This was a fascinating read, particularly for those who are interested in Victorian provision of the criminally insane . . . She also gives us a flavour of the population of the time, of the haves and the have-nots and really conjures up details of the place where the crime was committed in astonishing detail . . . enlightening and clear-sighted * Cleopatra Loves Books *
Housham is a dogged researcher and evocative writer. She sheds a powerful light on the era, skilfully describing the febrile, lawless atmosphere of 1860s Gateshead -- Jenny McCartney * Mail on Sunday *
Jane Housham grew up in Richmond, Yorkshire and is proud of her North East heritage. She is the publisher at University of Hertfordshire Press and also reviews books for the Guardian.
GOR008689309
9781786481603
178648160X
The Apprentice of Split Crow Lane: The Story of the Carr's Hill Murder by Jane Housham
Jane Housham
Used - Very Good
Paperback
Quercus Publishing
2017-08-24
368
N/A
Book picture is for illustrative purposes only, actual binding, cover or edition may vary.
This is a used book - there is no escaping the fact it has been read by someone else and it will show signs of wear and previous use. Overall we expect it to be in very good condition, but if you are not entirely satisfied please get in touch with us
Trustpilot