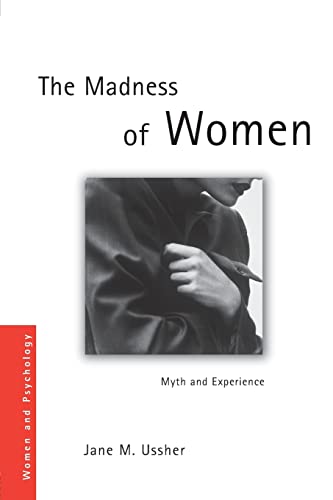 The Madness of Women
by Jane Professor Ussher

The Madness of Women Summary

The Madness of Women: Myth and Experience by Jane Professor Ussher

Nominated for the 2012 Distinguished Publication Award of the Association for Women in Psychology!

Why are women more likely to be positioned or diagnosed as mad than men?

If madness is a social construction, a gendered label, as many feminist critics would argue, how can we understand and explain women's prolonged misery and distress? In turn, can we prevent or treat women's distress, in a non-pathologising women centred way? The Madness of Women addresses these questions through a rigorous exploration of the myths and realities of women's madness.

Drawing on academic and clinical experience, including case studies and in-depth interviews, as well as on the now extensive critical literature in the field of mental health, Jane Ussher presents a critical multifactorial analysis of women's madness that both addresses the notion that madness is a myth, and yet acknowledges the reality and multiple causes of women's distress. Topics include:

This book will be of great interest to students and scholars of psychology, gender studies, sociology, women's studies, cultural studies, counselling and nursing.

Customer Reviews - The Madness of Women

The Madness of Women Reviews

"Jane Ussher's new book on women and madness is her third, and every bit as good as her path-breaking, earlier discussions. ... A valuable and impressive book. It will be take seriously by feminist theorists, as well as by those in the biomedical and social sciences, and it will prove a useful addition to curricula at graduate and undergraduate levels in the fields of psychology, feminist studies, and psychiatry." - Jennifer Radden, University of Massachusetts Boston, USA, in Psychology of Women Quarterly

"A complex and intriguing book. ... Anyone interested in a feminist and cultural perspective on how women come to be labeled as mad will find this book an interesting but valuable challenge." - Maxine Harris, CEO of Community Connections, Washington, D.C., USA in Psychiatric Services

"Written with verve in a polemical style, this book will not bore the reader. It starts with a convincing and moving deconstruction of the concept of madness, and moves on to a brief exploration of historical ideas about it. ... (This) includes first-hand testimony from psychiatric patients about the cruelty they have undergone; the combination of those women's voices and Ussher's confident tone is arresting. ... This book will be of interest to a wide range of readers beyond the obvious women's studies market. Training psychological practitioners (counsellors, psychotherapists, psychologists and arts therapists) should read it. Cultural studies, cultural history, social anthropology and sociology students will also find this book useful." - Times Higher Education Textbook Guide, November 2011

"The cumulative power of Ussher's material equals her commitment to the cause. It is hard to imagine any psychologist reading this book without coming to agree with some of its fundamental points. ... Ussher's critique of the deeply gendered basis of many of our fundamental assumptions about the sexes and, indeed, about human nature cuts that deeply and incisively." - Harriette Kaley, psychoanalyst, New York, USA, in PsycCRITIQUES

"The strength of this book lies in Ussher's detailed critique of the medicalisation of women's distress. ... She carefully dissects the diagnostic categories frequently applied to women. Whilst her descriptions of the profound misogyny involved in the labelling and treating of women with 'depression' are very compelling." - Caroline Cupitt, clinical psychologist, NHS, UK, in The Journal of Critical Psychology, Counselling and Psychotherapy

"I recently taught a section of (The Madness of Women) in an undergraduate course on Philosophy and Mental Illness, and it was influential with my students, who returned to its arguments again and again throughout the course. ... It would make an excellent text for graduate school courses not only in psychiatry and psychology, but in social work, nursing, and philosophy." - Nancy Nyquist Potter, University of Louisville, USA in Metapsychology

"The book is fascinating and informative while at times gruesome as it explores the treatment of many women who are considered mad. ... It would be beneficial for students and teachers to use the book in feminist studies, gender studies, sociology, psychology, and women's studies, as a tool for increasing the understanding and application of madness and women. ... One of the major strengths ... is the focus on several characteristics of madness, including depression, BPD PTSD, and PMDD." - Hennie Weiss, California State University, USA, in Sex Roles

"Ussher writes persuasively and clearly, using nuggets of examples to provoke thought. ... This was a fascinating and evidence-based book, which never claims to be representing two sides of a debate. I think Ussher might argue that her side of the argument needs more airtime in the psychiatric climate it is being voiced in, and perhaps she is right." - Lucy Maddox, Chartered Clinical Psychologist, London, UK, in The Psychologist

"This book is beautifully written and the arguments powerful and sophisticated, whilst at the same time accessible. The author's mastery in research and writing are clearly evident. The book is destined to become a 'classic' text in feminist psychology. A pleasure to read!" - Michelle Lafrance, Department of Psychology, St. Thomas University, Canada

"This book is a compelling, hard-hitting and illuminating analysis of the social cultural, historical and economic forces producing the madness of women. It is a powerful illustration of a long-standing feminist view - that the personal is political." - Ann Weatherall, School of Psychology, University of Wellington, New Zealand

Jane M. Ussher is Professor of Women's Health Psychology, and director of Gender Culture and Health Research at the University of Western Sydney, Australia. She is author of a number of books. Her current research focuses on women's sexual and reproductive health, with particular emphasis on premenstrual experiences, gendered issues in caring, and sexuality and fertility in the context of cancer.

1. The Madness of Women: Myth or Experience? 2. The Daughter of Hysteria: Depression as a "Woman's Problem"? 3. Labelling Women as Mad: Regulating and Oppressing Women. 4. Woman as Object, not Subject: Madness as Response to Objectification and Sexual Violence. 5. The Construction and Lived Experience of Women's Distress: Positioning Premenstrual Change as Psychiatric Illness. 6. Women's Madness: Resistance and Survival.

GOR006141870
The Madness of Women: Myth and Experience by Jane Professor Ussher
Jane Professor Ussher
Women and Psychology
Used - Very Good
Paperback
Taylor & Francis Ltd
2008-05-30
328
0415339286
9780415339285
N/A
Book picture is for illustrative purposes only, actual binding, cover or edition may vary.
This is a used book - there is no escaping the fact it has been read by someone else and it will show signs of wear and previous use. Overall we expect it to be in very good condition, but if you are not entirely satisfied please get in touch with us.