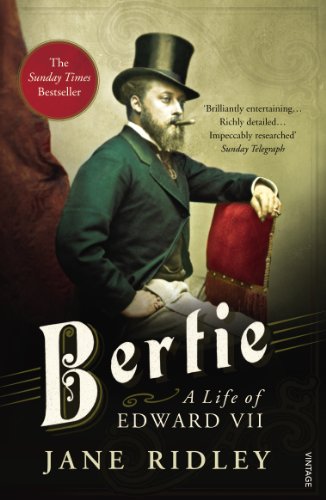 Bertie: A Life of Edward VII
by Jane Ridley

Out of Stock
$26.49
inc. GST
THE SUNDAY TIMES BESTSELLERSHORTLISTED FOR THE DUFF COOPER PRIZEEdward VII, who gave his name to the Edwardian era but was always known as Bertie, was fifty-nine when he finally came to power and ushered out the Victorian age.
Very Good
Only 0 left

Bertie: A Life of Edward VII by Jane Ridley

THE SUNDAY TIMES BESTSELLER SHORTLISTED FOR THE DUFF COOPER PRIZE Edward VII, who gave his name to the Edwardian era but was always known as Bertie, was fifty-nine when he finally came to power and ushered out the Victorian age. The eldest son of Queen Victoria and Prince Albert, Bertie was bullied by both his parents. Denied any proper responsibilities, the heir to the throne spent his time eating (which earned him the nickname `Tum Tum'), pursuing women (which Queen Victoria held to be the reason for Albert's early demise), gambling, going to house parties and race meetings, and shooting pheasants. His arranged marriage to the stunning Danish princess Alexandra gave him access to the European dynastic network; but his name was linked with many beauties, including Lillie Langtry and Winston Churchill's mother. This magnificent new biography provides new insight into the playboy prince while painting a vivid portrait of the age in all its excess and eccentricity.

"Brilliantly entertaining... Richly detailed, impeccably researched... Written with a light touch and full of human sympathy... A landmark royal biography" -- Anne Chisholm * Sunday Telegraph *
"This is not only the best biography of King Edward VII; it's also the best book about royalty ever published... Vivid, detailed and original" -- Piers Brendon * Independent *
"Paints the story of Edward VII and his long, hectic life as Prince of Wales in vivid colours: no scandal is left unturned, and yet the depth and authenticity of the research make it clear that this is a serious, even magesterial work" -- Antonia Fraser * Sunday Telegraph (Books of the Year) *
"Hugely entertaining from first page to last... It is also scholarly and revealing" -- Miriam Gross * Evening Standard (Books of the Year) *
"A model of how royal biographies should be written... impeccably researched, with much new material, balanced, sensible, disrespectful without being offensive, funny, and a vivid portrait of one of Britain's most underrated and understudied monarchs" -- Philip Ziegler * Spectator (Books of the Year) *

Jane Ridley is Professor of History at Buckingham University, where she teaches a course on biography. Her previous books include The Young Disraeli, acclaimed by Robert Blake as definitive, while her most recent biography, a highly praised study of the architect Edwin Lutyens and his relationship with his troubled wife, won the Duff Cooper Prize in 2003. A Fellow of the Royal Society of Literature, Ridley writes book reviews for the Spectator and other newspapers, and has also appeared on radio and several television documentaries. She lives in London and Scotland.

GOR005347965
Bertie: A Life of Edward VII by Jane Ridley
Jane Ridley
Used - Very Good
Paperback
Vintage Publishing
2013-10-03
624
0099575442
9780099575443
N/A
Book picture is for illustrative purposes only, actual binding, cover or edition may vary.
This is a used book - there is no escaping the fact it has been read by someone else and it will show signs of wear and previous use. Overall we expect it to be in very good condition, but if you are not entirely satisfied please get in touch with us.