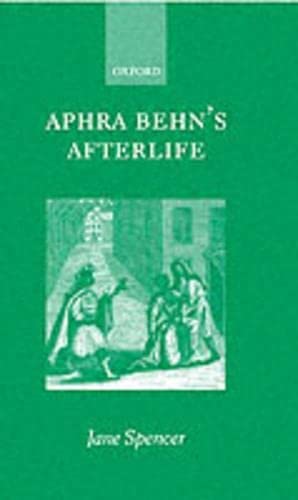 In Stock
$54.99
inc. GST
The most successful woman writer of the Restoration, Aphra Behn (1640-89) became an important influence on the literature of the following century. This book examines her complex legacy to later writers, both men and women, traces the stage history of her comedy The Rover, and shows how her Surinam novel, Oroonoko, was transformed into an instrument of the anti-slavery movement.
Very Good
Only 1 left

Aphra Behn, now becoming recognized as a major Restoration figure, is especially significant as an early example of a successful professional woman writer: an important and often troubling role-model for later generations of women. This book shows that her influence on eighteenth-century literature was far-reaching. Because literary history was (and to an extent still is) based on notions of patrilineal succession, it has been difficult to recognize the generative work of women's texts among male writers. This book suggests that Behn had 'sons' as well as 'daughters' and argues that we need a feminist revision of the notion of literary influence. Behn's reputation was very different in different genres. The book analyses her reception as a poet, a novelist, and a dramatist, showing how reactions to her became an important part of the creation of the English literary canon.

Jane Spencer's erudite and entertaining book offers an important argument about gender and influence and brings an exceptional grasp of historical nuance to Behn's works themselves and the various ways in which they were coopted by later writers in the service of a range of different agendas ... Jane Spencer's book will be a model for all later studies of gender and literary influence. * The Seventeenth Century *
Spencer's book is original in its argument, wide-ranging in its frame of reference, and written in elegant and lucid prose. It makes an important contribution to Aphra Behn studies and the history of women's writing more generally. It will have a lasting impact, too, on the study of cultural transmission and canon formation in the eighteenth century and beyond. * Review of English Studies *

Introduction ; PART I: REPUTATIONS ; Pleasure and Poetry: The Behn Myth ; The Novelist and the Poet ; PART II: INFLUENCES ; The Sons of Behn ; Her Wit, Without Her Shame: Women Writers after Behn ; PART III: RECEPTIONS ; The Rover ; Oroonoko ; Conclusion ; Bibliography ; Index