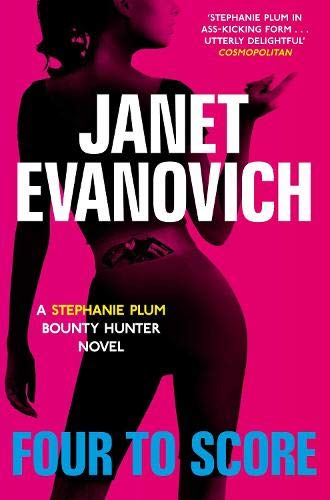 Four to Score
by Janet Evanovich

The problem with being a bounty hunter is it's all on-the-job training. And Stephanie Plum is still learning the ways to get yourself killed. Take the case of Maxine Norwicki . . .

In fact the notes are so indecipherable that Stephanie has to call on the help of Sally Sweet, giant drag queen and code-breaker extraordinaire. And Steph's knight errant, cop Joe Morelli, is also proving useful - although he can't decide what he wants most: Maxine's bounty or Stephanie's body.

Meanwhile a friend loses a finger, a mother is scalped, an apartment is firebombed and a store clerk is murdered. And out in the street, the crazy treasure hunt game goes on . . .

Janet Evanovich now lives in New Hampshire but, like Stephanie Plum, grew up in New Jersey.

She has won major crime fiction awards for her Stephanie Plum novels, including the CWA John Creasey Memorial, the Dilys on two occasions, the CWA Last Laugh and the CWA Silver Dagger for Three to Get Deadly.