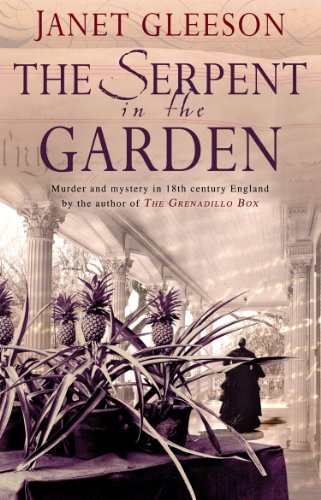 The Serpent In The Garden
by Janet Gleeson

Out of Stock
$17.49
inc. GST
The renowned portrait painter Joshua Pope is eager to escape London and his unhappy past and accepts a commission to paint a wedding portrait for Herbert Bentnick and his bride-to-be, Sabine Mercier.
Very Good
Only 0 left

The Serpent In The Garden Summary

The Serpent In The Garden by Janet Gleeson

Summer, 1765. The renowned portrait painter Joshua Pope is eager to escape London and his unhappy past and accepts a commission to paint a wedding portrait for Herbert Bentnick and his bride-to-be, Sabine Mercier. Joshua learns that the couple are avid horticulturalists. Bentnick's country house, Astley, in Richmond, is famous for its verdant gardens, designed by the master landscape artist Capability Brown. Sabine Mercier, who has lived most of her life in the Indies, is an expert in growing pineapples, the fruit of choice at the grandest dinner parties and an inspiration to artists and craftsmen. But soon after Sabine begins to cultivate pineapples in the vast conservatory at Astley, she discovers a body among her plants. Why, wonders Joshua Pope, is so little attention paid to this bizarre death? Why do Bentnick's children regard their future stepmother with suspicion and fear? And what connection does Sabine's daughter Violet have with the dead man? Outraged that any life can be valued so lightly, Joshua begins to investigate the death. But then Sabine's valuable emerald necklace disappears, and he is implicated. His need to discover what has happened at Astley suddenly becomes more pressing. Can Joshua solve the mystery before his reputation is ruined? And, more immediately, can he stay alive long enough to do so? Following her acclaimed debut, THE GRENADILLO BOX, Janet Gleeson has written another compelling tale of murder and mystery set in an exquisitely and authentically rendered Georgian England.

The Serpent In The Garden Reviews

"'Gripping...Gleeson's evocation of the period is meticulously researched and her plotting is neat and controlled...a good yarn'" * Independent on Sunday *
"An irresistible follow-up to acclaimed THE GRENADILLO BOX: 'Colourful and wildly entertaining...A wonderful read'" * Guardian *
"'As attractively crafted as the box itself'" * Independent on Sunday *
"'A delicious five-course banquet: a murder mystery is succeeded by an abandoned infant weepie, a love story, a social history and, finally, a richly flavoured, full-bodied, 18th-century whodunnit...You'll be kept guessing right up until the last page in this splendid novel'" * Harpers & Queen *
"'A compulsive page-turner which will appeal especially to anyone who was spellbound by Charles Palliser's The Quincunx'" * Daily Mail *

Janet Gleeson was born in Sri Lanka, where her father was a tea planter. After taking a degree in History of Art and English she joined Sotheby's, and later worked for Bonhams Auctioneers. In 1991 she joined Reed Books, where she was responsible for devising and writing Miller's Antiques and Collectibles. She is the author of the Sunday Times non-fiction bestsellers The Arcanum and The Moneymaker. She is also the author of three novels, The Grenadillo Box, The Serpent in the Garden and The Thief-Taker.

GOR001846196
The Serpent In The Garden by Janet Gleeson
Janet Gleeson
Used - Very Good
Paperback
Transworld Publishers Ltd
2004-09-01
416
0553815245
9780553815245
N/A
Book picture is for illustrative purposes only, actual binding, cover or edition may vary.
This is a used book - there is no escaping the fact it has been read by someone else and it will show signs of wear and previous use. Overall we expect it to be in very good condition, but if you are not entirely satisfied please get in touch with us.