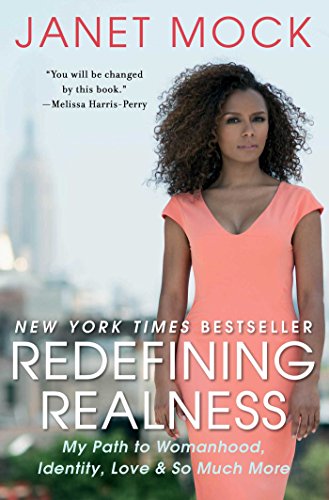 Redefining Realness: My Path to Womanhood, Identity, Love & So Much More by Janet Mock

In her profound and courageous New York Times bestseller, Janet Mock establishes herself as a resounding and inspirational voice for the transgender community-and anyone fighting to define themselves on their own terms.
With unflinching honesty and moving prose, Janet Mock relays her experiences of growing up young, multiracial, poor, and trans in America, offering readers accessible language while imparting vital insight about the unique challenges and vulnerabilities of a marginalized and misunderstood population. Though undoubtedly an account of one woman's quest for self at all costs, Redefining Realness is a powerful vision of possibility and self-realization, pushing us all toward greater acceptance of one another-and of ourselves-showing as never before how to be unapologetic and real.

Janet Mock is a writer, TV host, and advocate tackling stigma through storytelling. With a Master's in journalism from New York University, the Honolulu native began her career as an editor at People.com and went on to write cover stories for Marie Claire, Interview, and The Advocate as well as essays for The New Yorker, The New York Times, and Lenny. She produced HBO's The Trans List, hosts the podcast Never Before, and serves as a columnist for Allure. Called a "fearless new voice" and "trailblazing leader" who "changed my way of thinking" by Oprah Winfrey, Janet was a featured speaker at the historic Women's March on Washington. She is the author of Surpassing Certainty and the New York Times bestseller Redefining Realness. Find out more at JanetMock.com.

GOR009868937
Redefining Realness: My Path to Womanhood, Identity, Love & So Much More by Janet Mock
Janet Mock
Used - Like New
Paperback
Atria Books
2014-12-01
288
1476709130
9781476709130
N/A
Book picture is for illustrative purposes only, actual binding, cover or edition may vary.
The book has been read, but looks new. The book cover has no visible wear, and the dust jacket is included if applicable. No missing or damaged pages, no tears, possible very minimal creasing, no underlining or highlighting of text, and no writing in the margins.