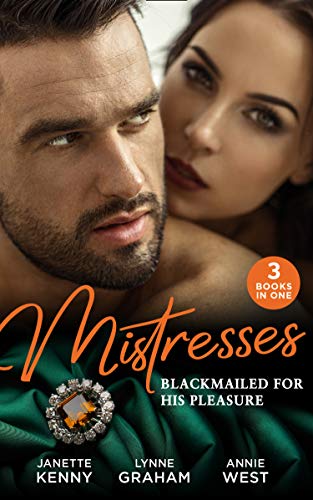 Mistresses: Blackmailed For His Pleasure
by Janette Kenny

Mistresses: Blackmailed For His Pleasure Summary

Mistresses: Blackmailed For His Pleasure: Innocent in the Italian's Possession / The Greek Tycoon's Blackmailed Mistress / The Savakis Mistress by Janette Kenny

Innocent in the Italian's Possession
When Gemma Cardone's boss is hospitalised and Stefano Marinetti, his estranged son, takes over the family business, she is caught between duty and desire. She must keep her boss' secrets at all costs... even if that cost is as Stefano's mistress!

The Greek Tycoon's Blackmailed Mistress
Ella Smithson desperately wants access to her orphaned baby niece, but the child's guardian is Aristandros Xenakis - her ex-fiance! Intent of revenge he demands Ella must become his mistress! Innocent Ella is not like the gold-digging females Aristandros has had before... Surely it's only a matter of time before he tires of her...?

The Savakis Mistress
Callie Manolis craves independence. She does not expect to be penniless and at the mercy of billionaire Damon Savakis. With a grudge against the illustrious Manoli family, Damon blackmails Callie into being his mistress, but is unprepared for her bravery, poise and innocence...

For as long as Janette Kenny can remember, stories have taken up residence in her head. Her mother read her the classics when she was a child which gave birth to a deep love of literature and allowed her to travel to exotic locales-those found between the covers of books. Her first real writing began with fan fiction, but it was several more years before her first historical romance was published. Janette loves to hear from readers. e-mail her at: janette@jankenny.com Lynne Graham lives in Northern Ireland and has been a keen romance reader since her teens. Happily married, Lynne has five children. Her eldest is her only natural child. Her other children, who are every bit as dear to her heart, are adopted. The family has a variety of pets, and Lynne loves gardening, cooking, collecting allsorts and is crazy about every aspect of Christmas. Annie has devoted her life to an intensive study of charismatic heroes who cause the best kind of trouble in the lives of their heroines. As a sideline she researches locations for romance, from vibrant cities to desert encampments and fairytale castles. Annie lives in eastern Australia with her hero husband, between sandy beaches and gorgeous wine country. She finds writing the perfect excuse to postpone housework. To contact her or join her newsletter, visit www.annie-west.com

GOR010233205
Mistresses: Blackmailed For His Pleasure: Innocent in the Italian's Possession / The Greek Tycoon's Blackmailed Mistress / The Savakis Mistress by Janette Kenny
Janette Kenny
Used - Very Good
Paperback
HarperCollins Publishers
2019-12-12
560
0263280683
9780263280685
N/A
Book picture is for illustrative purposes only, actual binding, cover or edition may vary.
This is a used book - there is no escaping the fact it has been read by someone else and it will show signs of wear and previous use. Overall we expect it to be in very good condition, but if you are not entirely satisfied please get in touch with us.