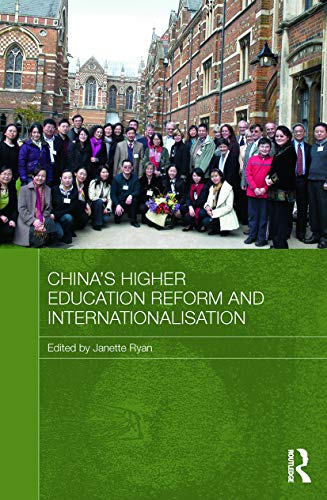 Despite radical and fundamental reform of the Chinese higher education system, very little is known about this outside China. The past decade has seen radical reform of all levels of China's education system as it attempts to meet changing economic and social needs and aspirations: this has included transformation of university curricula, pedagogy and evaluation measures, rapidly increasing joint research and degree programmes between Chinese universities and universities abroad, and very large numbers of Chinese students studying at universities outside China.

This book describes the historical, cultural, intellectual and contemporary background and contexts of the reform and internationalisation of higher education in China. It discusses these changes, outlines the challenges posed by the changes for university administrators, faculty, researchers, students and those working with Chinese academics and students in China and abroad, and assesses the impact, and evaluates the success, of the changes. Most importantly, it considers how this mobility of people and ideas across educational systems and cultures can contribute to new ways of working and understanding between Western and Chinese academic cultures.

The book is a companion to Education Reform in China, which focuses on reform at the early childhood, primary and secondary levels.

Janette Ryan is Senior Lecturer in the Faculty of Education at Monash University, Australia. Her publications include International Education and the Chinese Learner.

GOR010755475
China's Higher Education Reform and Internationalisation by Janette Ryan (China Centre, University of Oxford, UK)
Janette Ryan (China Centre, University of Oxford, UK)
Used - Very Good
Paperback
Taylor & Francis Ltd
2013-09-23
288
0415731372
9780415731379
N/A
Book picture is for illustrative purposes only, actual binding, cover or edition may vary.
This is a used book - there is no escaping the fact it has been read by someone else and it will show signs of wear and previous use. Overall we expect it to be in very good condition, but if you are not entirely satisfied please get in touch with us.