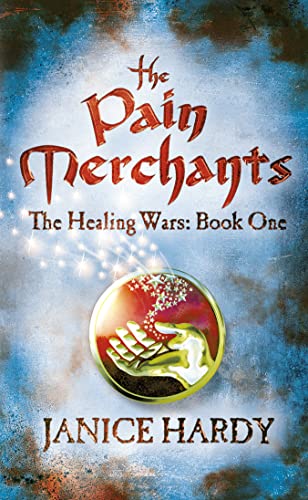 The Pain Merchants by Janice Hardy

The Pain Merchants (The Healing Wars, Book 1) by Janice Hardy

Fifteen-year-old Nya is one of Geveg's many orphans; she survives on odd jobs and optimism, finding both in short supply in a city crippled by a failed war for independence. Then a bungled egg theft, a stupid act of compassion, and two eyewitnesses unable to keep their mouths shut exposes her secret to the two most powerful groups in the city: the pain merchants and the Healer's League. They discover Nya is a Taker, a healer who can pull pain and injury from others.

Trouble is, unlike her sister Tali and the other normal Takers who become league apprentices, she can't dump that pain into pynvium, the enchanted metal used to store it. All she can do is shift it from person to person, a useless skill that's kept her out of the league and has never once paid for her breakfast.

When a ferry accident floods the city with injured, the already overwhelmed Takers start disappearing from the Healer's League and Nya's talent is suddenly in demand. But her principles and endurance are tested to the limit when her talent turns out to be the only thing that can save her sister's life.

GOR001515198
9780007326785
0007326785
The Pain Merchants (The Healing Wars, Book 1) by Janice Hardy
Janice Hardy
The Healing Wars
Used - Very Good
Paperback
HarperCollins Publishers
2009-10-01
304
Short-listed for Waterstone's Children's Book Prize 2011
Book picture is for illustrative purposes only, actual binding, cover or edition may vary.
This is a used book - there is no escaping the fact it has been read by someone else and it will show signs of wear and previous use. Overall we expect it to be in very good condition, but if you are not entirely satisfied please get in touch with us
Trustpilot