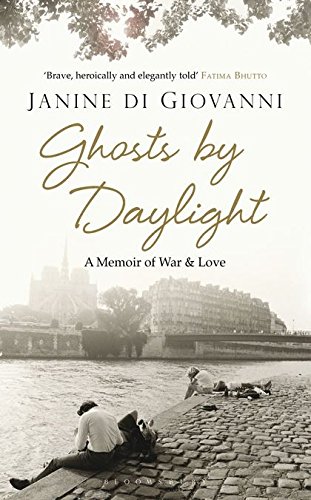 Ghosts By Daylight: A Memoir of War and Love by Janine di Giovanni

Before I reached the stairwell, I saw something out of the corner of my eye. A strange and beautiful man had dropped to his knees in front of me, unencumbered, unembarrassed. I stopped short. He was slender, almost Asiatic looking, wearing baggy combat trousers and a T-shirt. He was flirting, and then he was laughing at my reaction. There was not much for me to do but also smile... Janine and Bruno first fell in love as young reporters in the besieged city of Sarajevo. Years later - after endless phone calls, much of what the French call malentendu, secret trysts in foreign cities, numerous break-ups, three miscarriages, countless stories of rebel armies and a dozen wars that had passed between them - they arrive in Paris one rainy January to begin a new life together. The remnants of their separate lives, now left behind, are tentatively unpacked into their shared apartment on the Right Bank: Bruno's heavy blanket from Ethiopia, a set of long feathered arrows from Brazil, an ash tray stolen from a hotel in Algeria, and Janine's flak-jacket and canvas boots, still full of sand from the Western Desert in Iraq. But having met in another lifetime - in another world - ordinary, civilian life doesn't come easily. War has become part of them: it had brought them together, and, though both are damaged by it, neither can quite leave it behind. And the difficult journey that follows, through their mix of joy and terror at becoming parents, Bruno's battle with post-traumatic stress and addiction, and Janine's determination to make France her home, leads to an understanding of the truth that people who deeply love each other cannot always live together. A searing, profoundly moving love letter, beautifully written, Ghosts by Daylight is a powerfully raw portrait of marriage and motherhood in the aftermath of war.

'Only a writer as tender and intuitive as Janine di Giovanni can offer herself as a witness to some of the world's most barbarous and nightmarish wars while also deconstructing the very private unraveling of a once-beautiful love story. Ghosts by Daylight, just like its author, is brave, heroically and elegantly told, and brutally honest' * Fatima Bhutto *
'Di Giovanni is superb - an extraordinarily brave war correspondent and a wonderful writer as well' * William Shawcross *

Janine di Giovanni is contributing editor for Vanity Fair and writes for many American, British and French publications. A former senior foreign correspondent for The Times, she has reported more than a dozen conflicts and has won Granada Television's 'Foreign Correspondent of the Year' award, the National Magazine Award and two Amnesty International Media Awards. She is the author of four books, Against the Stranger, The Quick and the Dead, Madness Visible and The Place at the End of the World. In 2010, she was the President of the Jury of the Prix Bayeux for War Correspondents. Janine di Giovanni lives in Paris.

GOR003867085
Ghosts By Daylight: A Memoir of War and Love by Janine di Giovanni
Janine di Giovanni
Used - Very Good
Paperback
Bloomsbury Publishing PLC
2011-07-04
288
1408821346
9781408821343
N/A
Book picture is for illustrative purposes only, actual binding, cover or edition may vary.
This is a used book - there is no escaping the fact it has been read by someone else and it will show signs of wear and previous use. Overall we expect it to be in very good condition, but if you are not entirely satisfied please get in touch with us.