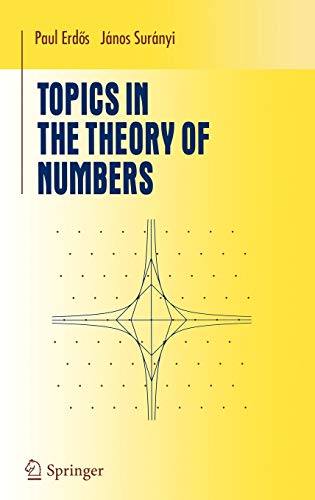 Topics in the Theory of Numbers by Janos Suranyi

Number theory, the branch of mathematics that studies the properties of the integers, is a repository of interesting and quite varied problems, sometimes impossibly difficult ones.

Topics in the Theory of Numbers by Janos Suranyi

Number theory, the branch of mathematics that studies the properties of the integers, is a repository of interesting and quite varied problems, sometimes impossibly difficult ones. In this book, the authors have gathered together a collection of problems from various topics in number theory that they find beautiful, intriguing, and from a certain point of view instructive.

"Read this book just for Erdoes's (Erdos's) characteristic turn of thought, or for results hard to find elsewhere, such as a finiteness theorem concerning odd perfect numbers with a fixed number of factors. Summing Up: Recommended. Lower-division undergraduates through professionals." (D.V. Feldman, CHOICE, December, 2003)

"This is an English translation of the second edition of a book originally published over 40 years ago ... . The contents should be accessible to, and inspire and challenge, keen pre-university students as well as giving the experienced mathematician food for thought. The proofs are elementary and largely self-contained, and the problems and results well motivated. ... This translation makes a very clearly and nicely written book available to many more readers who should benefit and gain much pleasure from studying it." (Eira J. Scourfield, Zentralblatt MATH, Issue 1018, 2003)

"This rather unique book is a guided tour through number theory. While most introductions to number theory provide a systematic and exhaustive treatment of the subject, the authors have chosen instead to illustrate the many varied subjects by associating recent discoveries, interesting methods, and unsolved problems. ... Janos Suranyi's vast teaching experience successfully complements Paul Erdoes's ability to initiate new directions of research by suggesting new problems and approaches." (L'Enseignement Mathematique, Vol. 49 (1-2), 2003)

"This is a somewhat enlarged translation of the Hungarian book ... . It goes without saying that the text is masterly written. It contains on comparatively few lines the fundamental ideas of not only elementary Number Theory: it contains also irrationality proofs ... . The book is hence by far not an n-th version of always the same matter. The style reminds me on the celebrated book of Polya ... . It is desirable that the book under discussion should have a similar success." (J. Schoissengeier, Monatshefte fur Mathematik, Vol. 143 (2), 2004)

"This an introduction to elementary number theory in which the authors present the main notions of that theory and 'try to give glimpses into the deeper related mathematics', as they write in the preface. There are 8 chapters ... . Each of them brings not only the notions and theorems (sometimes with unconventional proofs) which usually appear in introductory texts, but discusses also topics found rarely ... . One also finds several interesting historical comments." (W. Narkiewicz, Mathematical Reviews, 2003j)

* Preface * Facts Used Without Proof in the Book * Divisibility, the Fundamental Theorem of Number Theory * Congruences * Rational and irrational numbers. Approximation of numbers by rational numbers. (Diophantine approximation.) * Geometric methods in number theory * Properties of prime numbers * Sequences of integers * Diophantine Problems * Arithmetic Functions * Hints to the more difficult exercises * Bibliography * Index
GOR009656807
9780387953205
0387953205
Topics in the Theory of Numbers by Janos Suranyi
Janos Suranyi
Undergraduate Texts in Mathematics
Used - Very Good
Hardback
Springer-Verlag New York Inc.
2003-01-14
287
N/A
Book picture is for illustrative purposes only, actual binding, cover or edition may vary.
This is a used book - there is no escaping the fact it has been read by someone else and it will show signs of wear and previous use. Overall we expect it to be in very good condition, but if you are not entirely satisfied please get in touch with us
Trustpilot