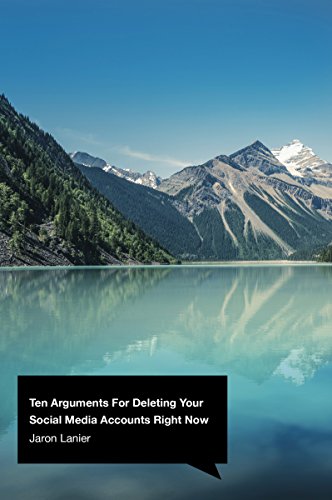 'A blisteringly good, urgent, essential read' ZADIE SMITH Jaron Lanier, the world-famous Silicon Valley scientist-pioneer and 'high-tech genius' (Sunday Times) who first alerted us to the dangers of social media, explains why its toxic effects are at the heart of its design, and explains in ten simple arguments why liberating yourself from its hold will transform your life and the world for the better. Social media is making us sadder, angrier, less empathetic, more fearful, more isolated and more tribal. In recent months it has become horribly clear that social media is not bringing us together - it is tearing us apart. In Ten Arguments For Deleting Your Social Media Accounts Right Now Jaron Lanier draws on his insider's expertise to explain precisely how social media works - by deploying constant surveillance and subconscious manipulation of its users - and why its cruel and dangerous effects are at the heart of its current business model and design. As well as offering ten simple arguments for liberating yourself from its addictive hold, his witty and urgent manifesto outlines a vision for an alternative that provides all the benefits of social media without the harm. So, if you want a happier life, a more just and peaceful world, or merely the chance to think for yourself without being monitored and influenced by the richest corporations in history, then the best thing you can do, for now, is delete your social media accounts - right now. You will almost certainly become a calmer and possibly a nicer person in the process.

Jaron Lanier is one of the most celebrated pioneers of digital innovation in the world, and also one of the earliest and most prescient critics of its current trajectory. His previous books include the international bestsellers Who Owns the Future? and You Are Not a Gadget, both chosen as best books of the year by the New York Times, and most recently Dawn of the New Everything: A Journey Through Virtual Reality, chosen as a best book of the year by the Wall Street Journal, The Economist and Vox. He was named one of the 100 most influential people in the world by Time, one of the 100 top public intellectuals by Foreign Policy, and one of the top 50 World Thinkers by Prospect.

GOR009101995
Ten Arguments For Deleting Your Social Media Accounts Right Now by Jaron Lanier
Jaron Lanier
Used - Like New
Hardback
Vintage Publishing
2018-05-31
160
1847925391
9781847925398
N/A
Book picture is for illustrative purposes only, actual binding, cover or edition may vary.
This is a used book - there is no escaping the fact it has been read by someone else and it will show signs of wear and previous use. Overall we expect it to be in very good condition, but if you are not entirely satisfied please get in touch with us.