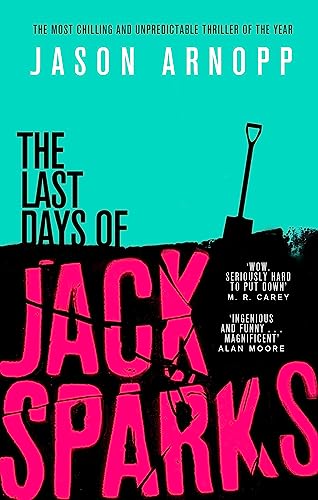 The Last Days of Jack Sparks
by Jason Arnopp

In Stock
$17.99
inc. GST
Prepare for the cleverest, most addictive thriller you will read this year. This is the story of the ill-fated Jack Sparks - a man who plays with fire, and pays the price . . .
Like New Very Good Good Well Read
Only 4 left

The Last Days of Jack Sparks: The most chilling and unpredictable thriller of the year by Jason Arnopp

It was no secret that journalist Jack Sparks had been researching the occult for his new book. No stranger to controversy, he'd already triggered a furious Twitter storm by mocking an exorcism he witnessed.

Then there was that video: forty seconds of chilling footage that Jack repeatedly claimed was not of his making, yet was posted from his own YouTube account.

Nobody knew what happened to Jack in the days that followed - until now.

'Brilliantly paced, utterly compelling, I didn't have *a clue* what would happen' Toby Whithouse

'Wittier than the lovechild of Stephen Fry and Charlie Brooker, scarier than watching The Exorcist in an abandoned asylum' Sarah Lotz, author of The Three

'This is The Omen for the social media age' Chris Brookmyre

Fascinating, hilarious, disturbing, exciting and surprising as hell. I couldn't put the book down * Ron Howard, director of APOLLO 13, A BEAUTIFUL MIND and THE DA VINCI CODE *
Ingenious and funny . . . A magnificent millennial nightmare * Alan Moore *
Wow. Seriously hard to put down . . . Chilling and utterly immersive * M. R. Carey, author of THE GIRL WITH ALL THE GIFTS *
This is The Omen for the social media age * Chris Brookmyre, author of the Jack Parlabane thrillers *
Wittier than the lovechild of Stephen Fry and Charlie Brooker; scarier than watching The Exorcist in an abandoned asylum. Fast, furious, original and most importantly, terrifying * Sarah Lotz, author of THE THREE *
We fell hard for Jason Arnopp's whip-smart and impulsive thriller . . . meet your new favourite book * iBooks Store *
Super spooky and addictively written * HEAT *
An absolutely great read. It scared the bejeezus out of me! * David Schneider, comedian, director and actor in I'M ALAN PARTRIDGE and THE DAY TODAY *
Cracking fun and genuinely creepy * Rick O'Shea, radio presenter *
Tremendous . . . a cracking read * Andy Nyman, co-creator of GHOST STORIES and Derren Brown's award-winning shows *
If you enjoy smart supernatural thrillers then read this book . . . I smashed through it in a couple of days * Daniel P. Carter, Radio 1 DJ *
This is one of those books where I'm sad when I'm not reading it. It manages the rare feat of being both horrific and hilarious, which makes me insanely jealous of Arnopp and has me considering how to kill him and consume his mighty power * Chuck Wendig, NEW YORK TIMES bestselling author *
I always suspected Jason Arnopp was a genius, and now, having read his first novel, I know I was right. Jack Sparks is an extraordinary literary creation, clever and awful, loveable and cruel and his story is so terrifying and believable that I could barely bring myself to turn off my lights at bedtime * Lisa Jewell, International bestselling author *
[A] shriekingly good paranormal thriller . . . Superb pacing, tightrope-taut suspense building and tight plotting * SUN *
Quite brilliant. An assured, ultra-modern occult story with real depth of character, a compelling and satisfyingly twisted narrative and a streak of genuine malevolence * Andrew O'Neill, comedian, presenter and musician *
The Last Days of Jack Sparks is whip-smart and perhaps, the greatest indictment of social media or endorsement of it . . . It is that kind of wonderful book that plays with your perception and is the very last word in gonzo journalism. If Hunter S. Thompson decided to write a novel channelling Aleister Crowley and with the wit of Augustus Burroughs, you would have the essence of this terrific novel * Ken Bruen, author of the Jack Taylor crime series *
Funny, creepy, and totally nuts. I had a blast reading it * Paul Tremblay, author of HEAD FULL OF GHOSTS *
It grabbed me relentlessly and made me reprioritize sleep . . . The conclusion is shocking, heartbreaking and absolutely fabulous. I really just loved this one. * THE SPECULATIVE HERALD *
Brilliantly unnerving. I couldn't put it down * Tiernan Douieb, comedian *
Arnopp's snappy prose and bizarre plot carry the day. An uneasy suspense shrouds the pages like a murky London fog. Devour it in one sitting * THE AUSTRALIAN WAY *
As funny as it is frightening * Paul Finch, SHORTLIST *
Original, clever, scary and funny...It kept me gripped and guessing from page one * Rebecca Levene, author of The Hollow Gods series *
A breath of fresh air, vivid and essential * John Higgs, author of STRANGER THAN WE CAN IMAGINE *

Jason Arnopp is a British author and scriptwriter. His background is in journalism: he has worked on titles such as Heat, Q, The Word, Kerrang!, SFX and Doctor Who Magazine. He has written comedy for Radio 4 and official tie-in fiction for Doctor Who and Friday the 13th, but The Last Days of Jack Sparks is the first novel which is entirely Jason's own fault (though some may prefer to lay the blame on Jack...).

GOR008368522
The Last Days of Jack Sparks: The most chilling and unpredictable thriller of the year by Jason Arnopp
Jason Arnopp
Used - Like New
Paperback
Little, Brown Book Group
2016-07-28
432
0356506851
9780356506852
N/A
Book picture is for illustrative purposes only, actual binding, cover or edition may vary.
This is a used book - there is no escaping the fact it has been read by someone else and it will show signs of wear and previous use. Overall we expect it to be in very good condition, but if you are not entirely satisfied please get in touch with us.