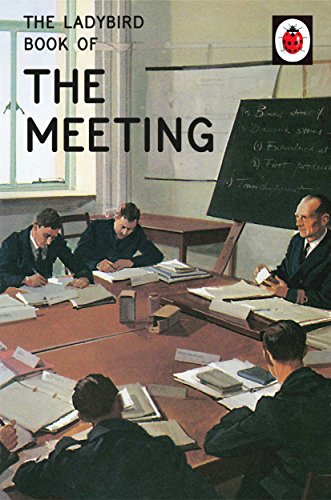 The Ladybird Book of the Meeting
by Jason Hazeley

The Ladybird Book of the Meeting Summary

The Ladybird Book of the Meeting by Jason Hazeley

'People at work spend a lot of the day in meetings.

Meetings are important because they give everyone a chance to talk about work.

He has three telephones, two Swiss desk intercoms, a fax machine and a wall-mounted theremin.

This delightful book is the latest in the series of Ladybird books which have been specially planned to help grown-ups with the world about them.

GOR008023617
The Ladybird Book of the Meeting by Jason Hazeley
Jason Hazeley
Ladybirds for Grown-Ups
Used - Like New
Hardback
Penguin Books Ltd
2016-10-20
56
0718184378
9780718184377
N/A
Book picture is for illustrative purposes only, actual binding, cover or edition may vary.
The book has been read, but looks new. The book cover has no visible wear, and the dust jacket is included if applicable. No missing or damaged pages, no tears, possible very minimal creasing, no underlining or highlighting of text, and no writing in the margins.