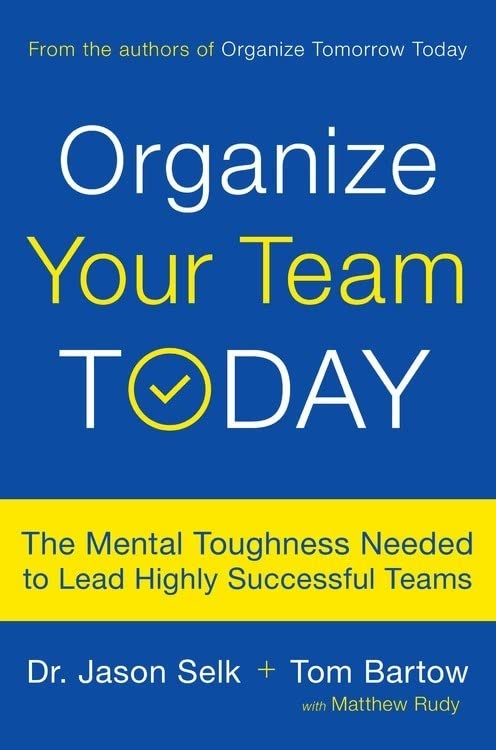 Watch a triumphant speech after a sports championship or business milestone, and you'll almost always hear some variation of this catchphrase: "It couldn't have happened without the great team we have." It doesn't matter if you're the owner of a 10,000-employee Fortune 500 company or running a small business, you're a part of a team. With a combined 50 years of experience building, managing, advising, and troubleshooting teams in both the business and sports worlds, Jason Selk and Tom Bartow now reveal the common DNA that links the highest performing teams.

In Organize Your Team Today, Selk and Bartow show how it takes collective mental toughness to win, developed only through a clear understanding of the goals, limitations, roles and personalities on your team. Great leaders respect and embrace channel capacity, Selk and Bartow explain, which means they don't overload their teams with blizzards of tasks and responsibilities. They bust the "focus" and "relationship" fallacies, as those words are meaningless for teams unless they are byproducts of activities that really matter. And Selk and Bartow teach how to manage expectations, since doing so creates a level of respect between the leader and the team--and among the team members--that is a catalyst for peak achievement.

Jason Selk (Author)
Dr. Jason Selk is one of the premier performance coaches in the United States, with dozens of professional athletes and Fortune 500 executives as his clients. As the Director of Mental Training for Major League Baseball's St. Louis Cardinals, Dr. Selk helped the team win two World Series championships, in 2006 and 2011. He is a regular contributor to Forbes, ABC, CBS, ESPN and NBC, and has been featured in USA Today, Men's Health, Muscle and Fitness, INC., and Self magazines.

Tom Bartow (Author)
Tom Bartow left a successful career as a college basketball coach to become one of the highest-producing financial advisors in Edward Jones's history. He went on to help American Funds's Capital Income Builder fund nearly triple in value. Since then, he has become one of the most creative and sought-after business coaches in the world, specializing in helping companies and individuals excel in times of adversity.

Matthew Rudy (Author)
Matthew Rudy has ghostwritten 26 sports, business, and travel books since 1997, including titles by golf instructors Dave Stockton, Hank Haney, and Stan Utley; sports psychiatrist Dr. Michael Lardon, and personal development coach Bryan Dodge. His book with personal finance expert Anthony Davenport will be published by Houghton Mifflin Harcourt in 2017. He is a senior writer at Golf Digest, where he has ghostwritten 25 cover stories since 1999 and earned national awards for his investigative and feature work.

GOR010030958
Organize Your Team Today: The Mental Toughness Needed to Lead Highly Successful Teams by Jason Selk
Jason Selk
Used - Very Good
Paperback
INGRAM PUBLISHER SERVICES US
2018-03-13
240
0738284769
9780738284767
N/A
Book picture is for illustrative purposes only, actual binding, cover or edition may vary.
This is a used book - there is no escaping the fact it has been read by someone else and it will show signs of wear and previous use. Overall we expect it to be in very good condition, but if you are not entirely satisfied please get in touch with us.