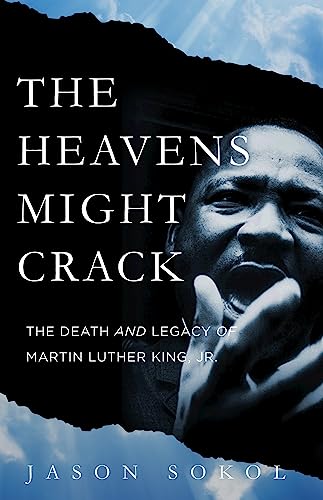 Out of Stock
$24.99
inc. GST
A vivid portrait of how Americans grappled with Martin Luther King Jr.'s death and legacy in the days, weeks, and months after his assassination
Like New
Only 0 left

The Heavens Might Crack: The Death and Legacy of Martin Luther King Jr. by Jason Sokol

Martin Luther King Jr today is an uncontroversial figure, and we tend to see him as a saint whose legacy is entirely uncomplicated. But in 1968, King was a polarizing figure, and his assassination was met with uncomfortably mixed reactions. At the time of his death, King was scorned by many white Americans, worshiped by a segment of African Americans and liberal whites, deemed irrelevant by the younger generation of African Americans, and beloved overseas. He was a hero to many. But to some, he was part of an old guard that was no longer relevant, and to others he was nothing more than a troublemaker and a threat to the Southern way of life.

In The Heavens Might Crack, historian Jason Sokol traces the diverse range of reactions to King's death, exploring how Americans - as well as others across the globe--experienced King's assassination, in the days, weeks, and months afterward. He looks at everything from rioting in inner cities to turbulence in Germany, from celebrations in many parts of the South to the growing gun control movement. Across all these responses, we see one clear trend: with King gone and the cities exploding, it felt like a gear in the machinery of the universe had shifted. Just a few years prior, with the enactment of landmark civil rights laws, interracial harmony appeared conceivable; peaceful progress toward civil rights even seemed probable. In an instant, such optimism had vanished. For many, King's death extinguished that final flicker of hope for a multiracial America. With that hope gone, King's assassination would have an indelible impact on American sentiments about race, and the civil rights landscape.

The Heavens Might Crack is a deeply empathetic portrait of country grappling with the death of a complicated man. By highlighting how this moment was perceived across the nation, Sokol reveals the enduring consequences King's assassination had for the shape of his own legacy, the course of the Civil Rights Movement, and race relations in America.

"Jason Sokol has done it again!... In vivid prose rooted in deep, wide-ranging research, The Heavens Might Crack is an indispensable read for all who would comprehend the past and care for our future."--Harvard Sitkoff, emeritus professor of history, University of New Hampshire
"Jason Sokol's book is not a biography of MLK, it is something more.... A most powerful book: well written, deeply researched, thoughtful, and honest."--Nick Salvatore, Cornell University
"Coming at a moment when an open racist occupies the highest office in the land and white terrorists proudly march in our streets, Sokol's book helps us understand how we got here, and how the forces of hatred and bigotry that ended King's life were never fully extinguished but remain very much with us today. A must read."--Andrew W. Kahrl, author of Free the Beaches: The Story of Ned Coll and the Battle for America's Most Exclusive Shoreline

"The Heavens Might Crack is an important, timely, and invigorating addition to the vast literature on Dr. Martin Luther King Jr. By examining the evolution of King's legacy after his death with great care and deft analysis, historian Jason Sokol offers new insights into the meaning of a life that continues to shape contemporary American democracy."--Peniel E. Joseph, author of Stokely: A Life
"Jason Sokol details with aching clarity how King's assassination and the urban uprisings of April 1968 sent shock waves across the landscapes of America's racial crisis and the world's revolts.... The heavens might have cracked, but Sokol's not-too-distant mirror shimmers with intensity and the recognition of King's continued relevance to our own travails." --Thomas F. Jackson, associate professor of history, University of North Carolina
"Comprehensive and illuminating...As we enter the second quarter of 2018, mid-term elections, an increasing sense of divisiveness through race, economic disparities, and the looming specter of war anywhere and everywhere as a means of distraction, Sokol's The Heavens Might Crack should serve as a critical reminder of what Americans are capable of. This work is an important addition to an already impressive library of civil rights narratives and Martin Luther King biographies."--PopMatters
"This striking and complex new work looks not so much at King himself as it does at the impact of his death and how it opened a wound in the country that has yet to heal. Sokol moves from the hours and days after his death to the present day, looking at Obama's election, the Black Lives Matter movement, and NFL player Colin Kaepernick's taking a knee during the national anthem."--Boston Globe
"Revealing... Sokol mines oral histories, books and contemporaneous news stories to pull together an account that reminds us that King was a radical who ignited passions both good and bad... While [the] broad outlines of King's story are well chronicled and fairly well known, the real punch in Sokol's book comes as it drives home the depth of the animus stirred by King and how it lingered in the months and years after his assassination."--Washington Post
"Shines a light on the unexplored aspects of King's life and work and provides new perspectives on his rich legacy. The Heavens Might Crack is a meticulously researched work by a historian whose scholarship remains unmatched."--Washington Book Review
"Drawing on archival sources, oral histories, interviews, and local, national, and even college newspapers, Sokol offers a richly detailed analysis of the impact of King's death on blacks and whites of all stripes... A revealing examination of how a 'courageous dissident' became a martyred saint."--Kirkus Reviews
"[A] fascinating look at King's importance as a revolutionary American humanitarian and his legacy... Sokol offers a well-written, new perspective on [King's] life here that all readers interested in twentieth-century history and the story of civil rights activism will find insightfully informative."--Booklist
"Sokol is an assured writer, deploying revealing, striking anecdotes... This book offers valuable yet painful insight into the paradox of King's stature throughout history."--Publishers Weekly
"[The Heavens Might Crack] places King in a balanced perspective both at home and abroad. This even-handed account helps explain the irony that King, in his day, was largely unpopular outside of African American communities yet now has become a symbol of American democracy. A highly readable volume that will appeal to a spectrum of scholars, students, and the general public interested in African American politics."--Library Journal, starred review
"Using a wide range of sources, from college newspapers to oral histories, Sokol dramatically demonstrates that even as King was canonized, factions split and fought over his legacy to advance their own visions and agendas."--National Book Review

Jason Sokol is the Arthur K. Withcomb Associate Professor of History at the University of New Hampshire since 2016, and was previously a Fellow at Harvard College's Department of African and African American Studies. He holds a PhD in U.S. history from the University of California, Berkeley, and was previously a Visiting Assistant Professor of History and Mellon Postdoctoral Fellow at Cornell University and a Mellow Fellow at the University of Pennsylvania. Sokol's first book, There Goes My Everything: White Southerners in the Age of Civil Rights, received rave reviews and was named one of the best books of 2006 by the Washington Post Book World. He was also named one of America's "Top Young Historians" by the History News Network, and his writing has appeared in the Nation, the New York Times, Slate, and the Boston Globe. Sokol lives in Newburyport, Massachusetts.

GOR010250410
The Heavens Might Crack: The Death and Legacy of Martin Luther King Jr. by Jason Sokol
Jason Sokol
Used - Like New
Hardback
INGRAM PUBLISHER SERVICES US
2018-03-20
320
0465055915
9780465055913
N/A
Book picture is for illustrative purposes only, actual binding, cover or edition may vary.
The book has been read, but looks new. The book cover has no visible wear, and the dust jacket is included if applicable. No missing or damaged pages, no tears, possible very minimal creasing, no underlining or highlighting of text, and no writing in the margins.