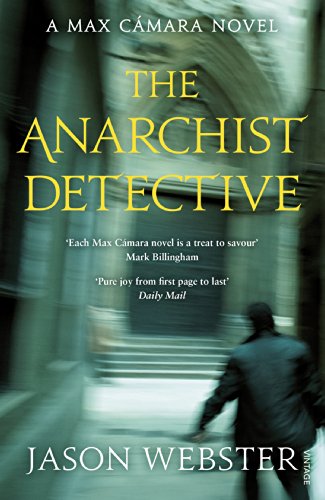 The Anarchist Detective
by Jason Webster

In Stock
$16.99
inc. GST
Sent on leave after his last, brutal, case, Max Camara returns to his home town in La Mancha, famous for producing the finest saffron in the world. His old friend Yago is investigating a particularly nasty murder which sets off memories Max has been trying to bury for years.
Very Good Good
Only 3 left

Sent on leave after his last, brutal, case, Max Camara returns to his home town in La Mancha, famous for producing the finest saffron in the world. There, the past keeps pulling at him. The town is exhuming a mass grave from the Civil War, but why is his grandfather behaving so strangely? His old friend Yago is investigating a particularly nasty murder which sets off memories Max has been trying to bury for years. And then there are Yago's whisperings about a saffron mafia... Max finds himself plunged into the thick of a complex and intensely personal case that will put him in severe danger and have him questioning his past - and his future in the police.

"Each Max Camara novel is a treat to savour" -- Mark Billingham
"A superbly balanced novel, it conveys a wonderful sense of Spain... [Webster] does for the country what Michael Dibdin did for Italy -- pure joy from first page to last" -- Geoffrey Wansell * Daily Mail *
"A gripping, intriguing thriller that beautifully evokes non-tourist Spain" * Sun *
"If you're tiring of the frigid climate of Scandinavian crime fiction, a welcome antidote may be found in Jason Webster's sultry (and elegantly written) Max Camara series set in Spain. This third entry is the most accomplished yet" -- Barry Forshaw * Financial Times *
"Neatly and inexorably Webster links murder, present and past... Dialogue is stark" -- Gwen Moffat * Shots Mag *

Brought up in England, Jason Webster has lived for several years in Valencia, the setting of his Camara novels. His acclaimed non-fiction books about Spain include Duende: A Journey in Search of Flamenco and Sacred Sierra: A Year on a Spanish Mountain. His first Camara crime novel, Or the Bull Kills You, was longlisted for the CWA Specsavers Crime Thriller Awards New Blood Dagger and was followed by the equally acclaimed A Death in Valencia.

GOR005767611
The Anarchist Detective: (Max Camara 3) by Jason Webster
Jason Webster
Max Camara
Used - Very Good
Paperback
Vintage Publishing
2014-06-05
288
0099565978
9780099565970
N/A
Book picture is for illustrative purposes only, actual binding, cover or edition may vary.
This is a used book - there is no escaping the fact it has been read by someone else and it will show signs of wear and previous use. Overall we expect it to be in very good condition, but if you are not entirely satisfied please get in touch with us.