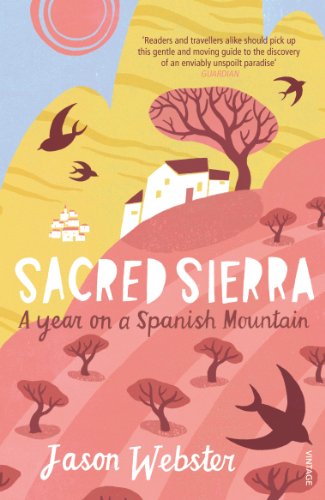 Used Price
$20.49
inc. GST
Free Shipping in Australia
Jason Webster had lived in Spain for 15 years when he and his partner Salud, a flamenco dancer, tired of their city life and decided to buy a crumbling farmhouse clinging to the side of a steep valley in the eastern province of Castellon.
Like New Very Good Good Well Read

Sacred Sierra: A Year on a Spanish Mountain by Jason Webster

Jason Webster had lived in Spain for 15 years when he and his partner Salud, a flamenco dancer, tired of their city life and decided to buy a crumbling farmhouse clinging to the side of a steep valley in the eastern province of Castellon. He knew nothing about farming - he didn't even know what an almond tree looked like, or that he owned over 100 of them - but with help from local farmers and a twelfth-century book on gardening he set about recreating his dream. Sacred Sierra tells the story of their first year on the mountain, and how they cleared the land, planted and harvested olives, nurtured precious, expensive truffles, all while surviving gale force winds and scorching summer fires. While toying with the timeless, he also retells ancient legends and as the year passed, finds himself increasingly in tune with the ancient, mystical life of the sierra, a place that will haunt your imagination and raise your spirits.

"Webster has the endearing writer's knack of making us laugh and weep along with him...written in the sympathetic tradition of Chris Stewart's best-selling Driving Over Lemons, but is even better" * Sunday Telegraph *
"Discursive and appealingly conversational...an inspiring account" * Daily Telegraph *
"Webster's style is engaging and elegiac" * Independent on Sunday *
"Webster is a clever, hugely readable interpreter of Spain. He is also irrepressible: his work is a master class in involvement...this deserves to be - and undoubtedly will be - one of the most successful books about Spain this year" -- Julian Evans * Independent *
"Full of romanticism, comedy mishaps and colourful characters, it makes for a deeply personal and highly personable account of one life-changing year" * Sunday Telegraph *

Brought up in England, Jason Webster has lived for many years in Spain. His acclaimed non-fiction books about Spain include Duende: A Journey in Search of Flamenco; Andalus: Unlocking the Secrets of Moorish Spain; Guerra: Living in the Shadows of the Spanish Civil War; Sacred Sierra: A Year on a Spanish Mountain and The Spy with 29 Names. His Max Camara series of crime novels started with Or the Bull Kills You, which was was longlisted for the CWA Specsavers Crime Thriller Awards New Blood Dagger 2011. This was followed by A Death in Valencia, The Anarchist Detective, Blood Med and A Body in Barcelona.

GOR010634654
Sacred Sierra: A Year on a Spanish Mountain by Jason Webster
Jason Webster
Used - Like New
Paperback
Vintage Publishing
2010-04-01
368
0099512947
9780099512943
N/A
Book picture is for illustrative purposes only, actual binding, cover or edition may vary.
The book has been read, but looks new. The book cover has no visible wear, and the dust jacket is included if applicable. No missing or damaged pages, no tears, possible very minimal creasing, no underlining or highlighting of text, and no writing in the margins.