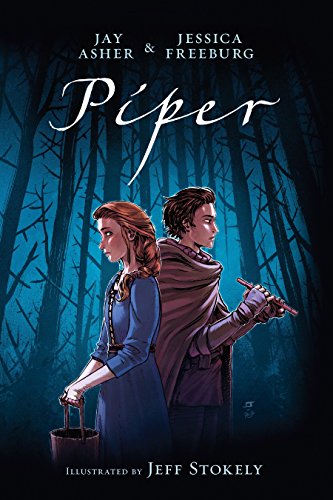 Out of Stock
$26.49
inc. GST
One girl's fairy-tale prince becomes her worst nightmare in this eerie graphic-novel retelling of the Pied Piper legend from Jay Asher, #1 New York Times bestselling author of Thirteen Reasons Why.
Like New
Only 0 left

Bestselling author Jay Asher and co-author Jessica Freeburg brilliantly reimagine the classic Pied Piper legend as a powerful story about loneliness, love, and vengeance. Long ago, in a small village in the middle of a deep, dark forest, there lived a lonely young girl named Maggie. Maggie is deaf and is shunned by her village because of this. Her only comfort comes from inventing stories and dreaming of one day finding her fairy-tale love. When Maggie meets the mysterious Piper, it seems that all her wishes are coming true. Spellbound, Maggie falls for him and plunges headfirst into his magical world. But as she grows closer to the Piper, Maggie discovers that he has a dark side...and an even darker past. Will the boy of Maggie's dreams end up being her worst nightmare? With striking illustrations from Eisner-nominated artist Jeff Stokely, Piper is an exciting new departure for Jay Asher that deftly touches on the same themes of truth, guilt, and redemption that made Thirteen Reasons Why a beloved bestseller.

Gorgeously illustrated and lyrically paced, PIPER had me under its spell from the first page. A riveting and, at times, chilling response to one of the most fascinating legends that history and fairy tales have given us.
--Marissa Meyer, #1 New York Times-bestselling author of The Lunar Chronicles and Renegades

Jay Asher and Jessica Freeburg have conjured real magic with PIPER! Mysterious and weird, scary and yet charming, they've managed to take an old story and craft it into something beautiful and new! Highly recommended.
--Jonathan Maberry, New York Times bestselling author of Rot & Ruin and Black Panther: Doomwar

With an unfailingly honest touch, Piper unlocks the mystery and finds the heart of one of our most haunting legends. Asher, Freeburg, and Stokely find the emotional True North and leave their audience, including me, reaching for our Kleenex. Loved!
--Danielle Paige, New York Times bestselling author of the Dorothy Must Die and Stealing Snow series

JAY ASHER's debut novel, Thirteen Reasons Why, a #1 New York Times and international bestseller, has sold over 3 million copies in the United States alone and is now a thirteen-part series on Netflix. The Future of Us, his second novel, was co-authored with Printz Honor winner Carolyn Mackler. He is also the author of the New York Times bestselling What Light. Piper, out in Fall 2017 and co-authored with Jessica Freeburg and illustrated by Jeff Stokely, will mark Asher's graphic novel debut. His novels have been translated into thirty-seven languages. He lives with his family in California. Follow him on Twitter @jayasherguy. JESSICA FREEBURG is the author of paranormal fiction (Living in Shadows) and narrative nonfiction works focused on creepy legends and dark moments in history including Monsters of the Midwest, Fight for Survival, and Collapse and Chaos. To blend her love of writing with her passion for history and the paranormal, Jessica founded Ghost Stories Ink, a group of authors, illustrators, and filmmakers who visit historic locations and perform paranormal investigations for creative inspiration. She also serves as the assistant regional advisor for the Minnesota Society of Children's Book Writers and Illustrators. Follow her @JessicaFreeburg. JEFF STOKELY is the co-creator and artist of Eisner-nominated comic series THE SPIRE. He is the artist of acclaimed series SIX-GUN GORILLA and JIM HENSON'S THE STORYTELLER: WITCHES, THE REASON FOR DRAGONS. Follow him @JeffStokely.

GOR010401315
Piper by Jay Asher
Jay Asher
Used - Like New
Paperback
Penguin Putnam Inc
2017-10-23
0448493667
9780448493664
N/A
Book picture is for illustrative purposes only, actual binding, cover or edition may vary.
The book has been read, but looks new. The book cover has no visible wear, and the dust jacket is included if applicable. No missing or damaged pages, no tears, possible very minimal creasing, no underlining or highlighting of text, and no writing in the margins.