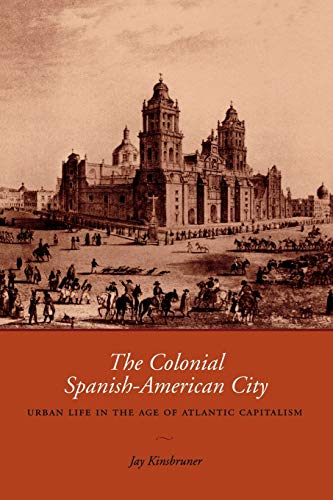 The Colonial Spanish-American City: Urban Life in the Age of Atlantic Capitalism by Jay Kinsbruner

The colonial Spanish-American city, like its counterpart across the Atlantic, was an outgrowth of commercial enterprise. A center of entrepreneurial activity and wealth, it drew people seeking a better life, with more educational, occupational, commercial, bureaucratic, and marital possibilities than were available in the rural regions of the Spanish colonies. Indeed, the Spanish-American city represented hope and opportunity, although not for everyone.

In this authoritative work, Jay Kinsbruner draws on many sources to offer the first history and interpretation in English of the colonial Spanish-American city. After an overview of pre-Columbian cities, he devotes chapters to many important aspects of the colonial city, including its governance and administrative structure, physical form, economy, and social and family life. Kinsbruner's overarching thesis is that the Spanish-American city evolved as a circumstance of trans-Atlantic capitalism. Underpinning this thesis is his view that there were no plebeians in the colonial city. He calls for a class interpretation, with an emphasis on the lower-middle class. His study also explores the active roles of women, many of them heads of households, in the colonial Spanish-American city.

"This book stands alone as a study of the Spanish-American city... It brings together material on the structure of Spanish colonial cities [and] society in the cities, with an especially useful discussion of occupations and family organizations... General readers will also find this an interesting book." William H. Beezley, Professor of History, University of Arizona

JAY KINSBRUNER is Professor Emeritus of History at Queens College, City University of New York. A distinguished scholar of Latin American history, he is the author of several books, including Independence in Spanish America: Civil Wars, Revolutions, and Underdevelopment; Not of Pure Blood: The Free People of Color and Racial Prejudice in Nineteenth-Century Puerto Rico; and Petty Capitalism in Spanish America: The Pulperos of Puebla, Mexico City, Caracas, and Buenos Aires.

GOR011100953
The Colonial Spanish-American City: Urban Life in the Age of Atlantic Capitalism by Jay Kinsbruner
Jay Kinsbruner
Used - Like New
Paperback
University of Texas Press
2005-05-01
198
0292706685
9780292706682
Winner of A Choice Magazine Outstanding Academic Book 2007 (United States)
Book picture is for illustrative purposes only, actual binding, cover or edition may vary.
The book has been read, but looks new. The book cover has no visible wear, and the dust jacket is included if applicable. No missing or damaged pages, no tears, possible very minimal creasing, no underlining or highlighting of text, and no writing in the margins.