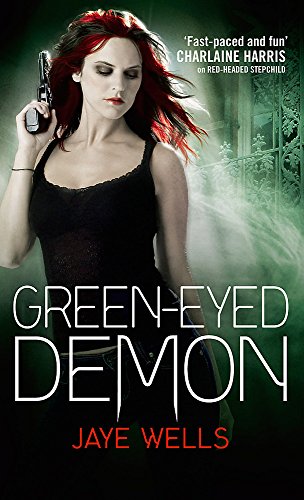 Used Price
$14.49
inc. GST
Free Shipping in Australia
Book three in this a compulsive urban fantasy series. Sabina, a half-blood assassin, bridges the gap in a mage/vampire schism that could just lead to war . . .
Very Good

The clock is ticking for Sabina Kane. With her sister taken by mysterious captors, the Dark Races on the brink of war and a sinister order manipulating everyone behind the scenes, she's really got her work cut out.

Using information provided by an unlikely ally, Sabina and her trusty sidekicks - the sexy mage Adam Lazarus and Giguhl, the Mischief demon - head to New Orleans to begin the hunt for her sister. Once there, they must contend with belligerent werewolves, magic-wielding vampires and, perhaps most frightening of all, humans.

But before Sabina can save those she cares about, she's got to save herself from the ghosts of her former life. Because the past is haunting her. Literally.

Jaye Wells took an art history degree, before embarking on a series of random career paths. She eventually became a magazine editor, then took up freelance writing. But she left all that behind to make stuff up for a living. She lives in Texas with her saintly husband and devilish son.

GOR002560789
Green-Eyed Demon: Sabina Kane: Book 3 by Jaye Wells
Jaye Wells
Sabina Kane
Used - Very Good
Paperback
Little, Brown Book Group
2011-02-03
400
1841497584
9781841497587
N/A
Book picture is for illustrative purposes only, actual binding, cover or edition may vary.
This is a used book - there is no escaping the fact it has been read by someone else and it will show signs of wear and previous use. Overall we expect it to be in very good condition, but if you are not entirely satisfied please get in touch with us.