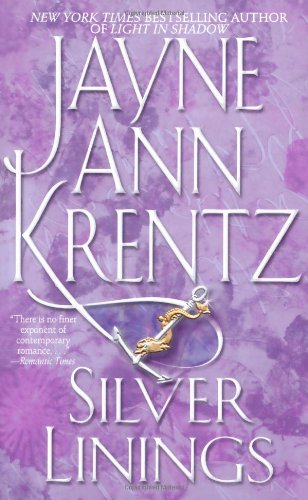 In Stock
$12.99
+10% GST
When Seattle art dealer Mattie Sharpe runs into her old flame, professional adventurer Hugh Abbott, in an island jungle, they are both running for their lives, facing danger, and rediscovering the passion they lost years before.
Very Good Good
Only 1 left

Love burned them once -- now they're twice as hot!
Silver Linings
Successful but shy, Seattle art dealer Mattie Sharpe fell hard for handsome, outspoken, professional adventurer Hugh Abbott. When he broke her heart and returned to his South Sea island home, Mattie vowed she'd only meet him again over her -- or better, his -- dead body.
When they do meet again, it's over someone else's dead body -- and now they're running for their lives through a tropical paradise. Hugh's talking fast to make up for his mistake. Mattie's not listening...until his gentle touch ignites a white-hot fusion, and she gives in. But Hugh's past is catching up with them, and Mattie must stake her very survival on the man she loves -- the only man who ever let her down! If there is a silver lining to a broken heart, Mattie's about to discover it -- when love storms back into her life and sweeps her off her feet!
Passion is an adventure -- and seduction an art -- in Silver Linings, from beloved New York Times bestselling author Jayne Ann Krentz!

Romantic Times There is no finer exponent of contemporary romance....

The author of over fifty consecutive New York Times bestsellers, Jayne Ann Krentz writes romantic-suspense in three different worlds: Contemporary (as Jayne Ann Krentz), historical (as Amanda Quick) and futuristic/paranormal (as Jayne Castle). There are over 30 million copies of her books in print. She earned a BA in history from the University of California, Santa Cruz and went on to obtain a Master's degree in library science from San Jose State University in California. Before she began writing full time she worked as a librarian in both academic and corporate libraries. She is married and lives with her husband, Frank, in Seattle, Washington. Jayne loves to hear from her readers and can be found at Facebook.com/JayneAnnKrentz.

GOR002690442
Silver Linings by Jayne Ann Krentz
Jayne Ann Krentz
Used - Very Good
Paperback
Simon & Schuster
1997-10-01
346
0671019627
9780671019624
N/A
Book picture is for illustrative purposes only, actual binding, cover or edition may vary.
This is a used book - there is no escaping the fact it has been read by someone else and it will show signs of wear and previous use. Overall we expect it to be in very good condition, but if you are not entirely satisfied please get in touch with us.