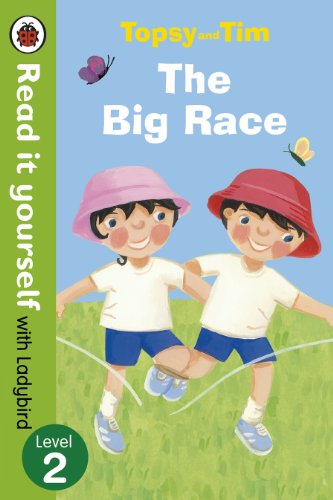 Topsy and Tim: The Big Race - Read it yourself with Ladybird
by Jean Adamson

Out of Stock
$34.99
inc. GST
It is Sports Day at school and Topsy and Tim are cross that they are not winning any races. With one race to go, will the twins overcome their differences and work together?
Very Good
Only 0 left

Topsy and Tim: The Big Race - Read it yourself with Ladybird Summary

Topsy and Tim: The Big Race - Read it yourself with Ladybird: Level 2 by Jean Adamson

An adaptation of the classic Topsy and Tim story by Jean and Gareth Adamson. It's Sports Day at school and Topsy and Tim are cross that they are not winning any races. With one race to go, will the twins overcome their differences and work together?

Read it yourself with Ladybird is one of Ladybird's best-selling series. For over thirty-five years it has helped young children who are learning to read develop and improve their reading skills.

Each Read it yourself book is very carefully written to include many key, high-frequency words that are vital for learning to read, as well as a limited number of story words that are introduced and practised throughout. Simple sentences and frequently repeated words help to build the confidence of beginner readers and the four different levels of books support children all the way from very first reading practice through to independent, fluent reading.

Each book has been carefully checked by educational consultants and can be read independently at home or used in a guided reading session at school. Further content includes comprehension puzzles, helpful notes for parents, carers and teachers, and book band information for use in schools.

Topsy and Tim: The Big Race is a Level 2 Read it yourself title, ideal for children who have received some initial reading instruction and can read short, simple sentences with help.

Jean Adamson is the creator of more than 100 much-loved children's books spanning five decades.
She studied Illustration at Goldsmiths where she met her future husband and writing partner Gareth Adamson (1925-1982). They worked on children's books together, with Gareth producing the storylines and Jean the illustration, including Topsy and Tim.
More than 140 Topsy and Tim titles have been published, selling upwards of 21 million copies around the world. Since 1998, over a million copies have been sold in the UK alone. Sixty episodes of an animated TV series followed, and three seasons of a live-action version have broadcast on CBeebies, which won the BAFTA Pre-school Live Action award in 2016.
In 1999 Jean Adamson was awarded an MBE for her services to children's literature.

GOR005957848
Topsy and Tim: The Big Race - Read it yourself with Ladybird: Level 2 by Jean Adamson
Jean Adamson
Read It Yourself
Used - Very Good
Paperback
Penguin Books Ltd
2013-06-26
32
0723273855
9780723273851
N/A
Book picture is for illustrative purposes only, actual binding, cover or edition may vary.
This is a used book - there is no escaping the fact it has been read by someone else and it will show signs of wear and previous use. Overall we expect it to be in very good condition, but if you are not entirely satisfied please get in touch with us.