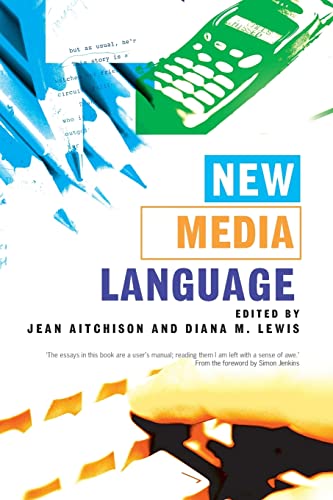 In Stock
$15.49
inc. GST
From newspapers and television to email, the internet and text messaging, there are ever increasing media conduits for the news. Bringing media figures and scholars to debate the shifting relations between today's media and contemporary language, this text investigates how developments in world media have affected and been affected by, language.
Very Good
Only 1 left

New Media Language brings leading media figures and scholars together to debate the shifting relations between today's media and contemporary language.
From newspapers and television to email, the Internet and text messaging, there are ever increasing media conduits for news. This book investigates how developments in world media have affected, and been affected by, language. Exploring a wide range of topics, from the globalization of communication to the vocabulary of terrorism and the language used in the wake of September 11, New Media Language looks at the important and wide-ranging implications of these changes. From Malcolm Gluck on wine writing, to Naomi Baron on email, the authors provide authoritative and engaging insights into the ways in which language is changing, and in turn, changes us.
With a foreword by Simon Jenkins, New Media Language is essential reading for anyone with an interest in today's complex and expanding media.

'Refreshingly, none of the contributors descends to the banal claim that "9/11 changed everything".' - Times Higher Education Supplement

'This collection of essays ... sheds light on the way language develops in all societies and times. I recommend this collection to anyone interested in the subtle links between the global economy and the intimacies of personal expression.' - Times Higher Education Supplement

'The strength and value of this volume lie in the diversity of its individual articles, written by an interesting mix of scholars and media professionals.' - Linguist List

'A comprehensive guide to media discourse ... The overview of media language that this text provides makes it useful to linguists as well as journalists and public relations professionals.' - Language

GOR003069279
New Media Language by Jean Aitchison
Jean Aitchison
Used - Very Good
Paperback
Taylor & Francis Ltd
2003-05-22
224
0415283043
9780415283045
N/A
Book picture is for illustrative purposes only, actual binding, cover or edition may vary.
This is a used book - there is no escaping the fact it has been read by someone else and it will show signs of wear and previous use. Overall we expect it to be in very good condition, but if you are not entirely satisfied please get in touch with us.