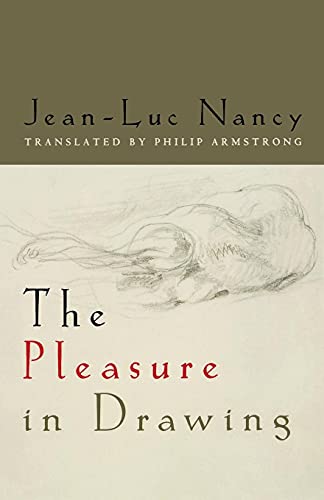 The Pleasure in Drawing by Jean-Luc Nancy

Originally written for an exhibition Nancy curated at the Museum of Fine Arts in Lyon in 2007, the text addresses the medium of drawing in light of form in its formation, of form as a formative force, opening drawing to questions of pleasure and desire.

The Pleasure in Drawing by Jean-Luc Nancy

Originally written for an exhibition Jean-Luc Nancy curated at the Museum of Fine Arts in Lyon in 2007, this book addresses the medium of drawing in light of the question of form-of form in its formation, as a formative force, as a birth to form. In this sense, drawing opens less toward its achievement, intention, and accomplishment than toward a finality without end and the infinite renewal of ends, toward lines of sense marked by tracings, suspensions, and permanent interruptions.
Recalling that drawing and design were once used interchangeably, Nancy notes that drawing designates a design that remains without project, plan, or intention. His argument offers a way of rethinking a number of historical terms (sketch, draft, outline, plan, mark, notation), which includes rethinking drawing in its graphic,filmic, choreographic, poetic, melodic, and rhythmic senses.
If drawing is not reducible to any form of closure, it never resolves a tension specific to itself. Rather, drawing allows the pleasure in and of drawing, the gesture of a desire that remains in excess of all knowledge, to come to appearance. Situating drawing in these terms, Nancy engages a number of texts in which Freud addresses the force of desire in the rapport between aesthetic and sexual pleasure, texts that also turn around questions concerning form in its formation, form as a formative force. Between the sections of the text, Nancy has placed a series of sketchbooks on drawing, composed of a broad range of quotations on art from different writers, artists, or philosophers.

What is it about drawing that might attract a philosopher's eye? Many things no doubt but not least, there is the (literally) unthinkable movement by which something begins to take shape. Jean-Luc Nancy's approach in The Pleasure in Drawing moves beyond art-historical categories and conceptual schemas to touch on precisely that: he considers the 'formative force' of drawing, not in terms of its formal achievement but in terms of the pleasures afforded by its constant beginning-pleasures of attraction, sense, permanent interruption, tension and intensity. A book full of dazzling insights, imaginative curves and provocative renewals.----Sarah Clift, University of King's College
Jean-Luc Nancy is Distinguished Professor of Philosophy at the Universite Marc Bloch, Strasbourg. His wide-ranging thought is developed in many books, including Portrait, The Possibility of a World, The Banality of Heidegger, The Disavowed Community, and Corpus. Philip Armstrong is Associate Professor in the Department of Comparative Studies at The Ohio State University.
Translator's Note Preface to the English-Language Edition Form Sketchbook 1 Idea Sketchbook 2 Formative Force Sketchbook 3 The Pleasure of Drawing Sketchbook 4 Forma Formans Sketchbook 5 From Self Toward Self Sketchbook 6 Consenting to Self Sketchbook 7 Gestural Pleasure Sketchbook 8 The Form-Pleasure Sketchbook 9 The Designing/Drawing of the Arts Sketchbook 10 Mimesis Sketchbook 11 Pleasure of Relation Sketchbook 12 Death, Sex, Love of the Invisible Sketchbook 13 Ambiguous Pleasure Sketchbook 14 Purposiveness Without Purpose Sketchbook 15 Desire of the Line Sketchbook 16 Notes
NGR9780823250943
9780823250943
0823250946
The Pleasure in Drawing by Jean-Luc Nancy
Jean-Luc Nancy
New
Paperback
Fordham University Press
20130716
128
null null null null null null null null null null
Book picture is for illustrative purposes only, actual binding, cover or edition may vary.
This is a new book - be the first to read this copy. With untouched pages and a perfect binding, your brand new copy is ready to be opened for the first time
Trustpilot