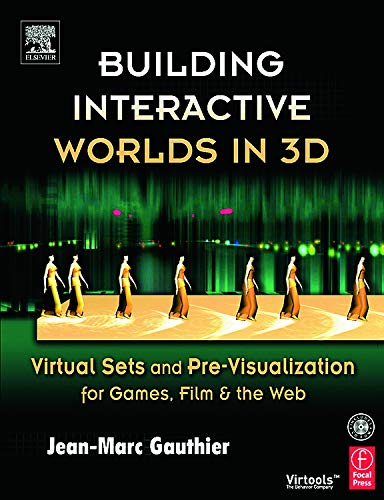 In Building Interactive Worlds in 3D readers will find turnkey tutorials that detail all the steps required to build simulations and interactions, utilize virtual cameras, virtual actors (with self-determined behaviors), and real-time physics including gravity, collision, and topography. With the free software demos included, 3D artists and developers can learn to build a fully functioning prototype. The book is dynamic enough to give both those with a programming background as well as those who are just getting their feet wet challenging and engaging tutorials in virtual set design, using Virtools. Other software discussed is: Lightwave, and Maya. The book is constructed so that, depending on your project and design needs, you can read the text or interviews independently and/or use the book as reference for individual tutorials on a project-by-project basis. Each tutorial is followed by a short interview with a 3D graphics professional in order to provide insight and additional advice on particular interactive 3D techniques-from user, designer, artist, and producer perspectives.

"Coming at the process of making interactive worlds from a non-gaming viewpoint proves to be a refreshing break...Provided is a version of the Virtools pre-visualisation package, which is used to set up the interaction between objects, cameras and players. And this is where Gauthier comes into his own with paticularly thought-provoking chapters on issues such as camera set-up and pathfinding." - Edge magazine

Cahpter 2
3D basic kit
- Solutions to practical and conceptual problems
- Modeling and texturing for interactive 3D
- Alpha channels and transparencies
- Photorealistic real-time 3D rendering on a PC or on a Mac
- Project:designing a skybox
- Interview: Benjy Bernhard about creating virtual sets for the AMNH's Planetarium

Chapter 9
Following a terrain with a remote controlled car
- Modeling and texturing a terain
- Modeling the car and obstacles
- Collision against the terrain
- Collision between a character and walls and other collisions
- Adding physics: springs
- Other methods: ray calculations
- Project: an online 3D game
- Interview: game designer, Sokal, creator of Syberiade, about virtual sets for game design