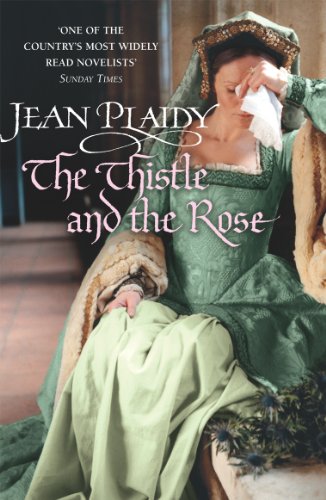 The Thistle and the Rose
by Jean Plaidy (Novelist)

In Stock
$17.49
inc. GST
Jean Plaidy's Tudor series continues with the scandalous and heartbreaking story of Margaret Tudor, a princess who leaves England for Scotland and whose future was used to end war and unite kings.
Very Good Good Well Read
Only 3 left

The Thistle and the Rose Summary

The Thistle and the Rose: (Tudor Saga) by Jean Plaidy (Novelist)

Jean Plaidy's Tudor series continues with the scandalous and heartbreaking story of Margaret Tudor, a princess who leaves England for Scotland and whose future was used to end war and unite kings. When King Henry VII negotiates peace with Scotland, his daughter's hand in marriage to James IV is the ultimate prize. A true princess, Margaret Tudor leaves her beloved England and accepts her fate unquestioningly. But to her surprise she falls madly in love with the fearsome Scottish King and, as Queen of Scotland, for a while she is happy. But neither the marriage nor the peace are to last. When James IV is defeated in battle by Margaret's own brother, the widowed Queen is torn between fleeing to her home and staying to protect her son's future as the new King of Scots. It seems that once again Margaret's destiny is not to be her own...

The Thistle and the Rose Reviews

"Her novels are still very much to be enjoyed ... Any writer who can both educate and thrill a reader of any age deserves to be remembered and find new fans ... One only has to look at the TV/Media to see that the appetite for this kind of writing is still very much there" -- Matt Bates * WH Smith Travel *
"Jean Plaidy doesn't just write the history, she makes it come alive." -- Julia Moffat, RNA
"Plaidy excels at blending history with romance and drama" * New York Times *
"Full-blooded, dramatic, exciting" * Observer *
"Jean Plaidy, by the skilful blending of superb storytelling and meticulous attention to authenticity of detail and depth of charaterization has become one of the country's most widely read novelists" * Sunday Times *

Jean Plaidy, one of the preeminent authors of historical fiction for most of the twentieth century, is the pen name of the prolific English author Eleanor Hibbert, also know as Victoria Holt. Jean Plaidy's novels had sold more than 14 million copies worldwide by the time of her death in 1993.

GOR001263013
The Thistle and the Rose: (Tudor Saga) by Jean Plaidy (Novelist)
Jean Plaidy (Novelist)
Tudor Saga
Used - Very Good
Paperback
Cornerstone
2006-10-05
384
009949325X
9780099493259
N/A
Book picture is for illustrative purposes only, actual binding, cover or edition may vary.
This is a used book - there is no escaping the fact it has been read by someone else and it will show signs of wear and previous use. Overall we expect it to be in very good condition, but if you are not entirely satisfied please get in touch with us.