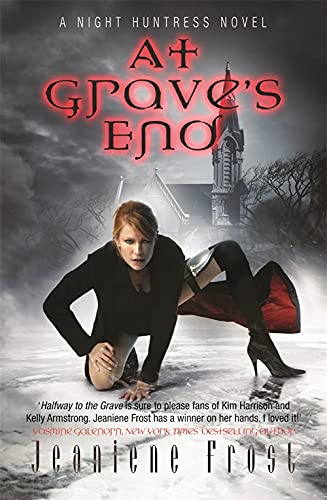 At Grave's End
by Jeaniene Frost

At Grave's End: A Night Huntress Novel by Jeaniene Frost

It should be the best time of half-vampire Cat Crawfield's life. With her undead lover Bones at her side, she's successfully protected mortals from the rogue undead. But though Cat's worn disguise after disguise to keep her true identity a secret from the brazen bloodsuckers, her cover has finally been blown, placing her in terrible danger.

And if that wasn't enough, a woman from Bones' past is determined to bury him once and for all. Caught in the crosshairs of a vengeful vamp yet determined to help Bones stop a lethal magic from being unleashed, Cat's about to learn the true meaning of bad blood. And the tricks she's learnt as a special agent won't help her here. She's going to have to fully embrace her vampire instincts if she's going to save herself - and Bones - from a fate worse than the grave.

`Sure to please fans of Kim Harrison and Kelly Armstrong. Jeaniene Frost has a winner on her hands. I loved it!' * Yasmine Galenorn, New York Times Bestsellier *
`Cat will have you staked in five seconds flat' * Cheyenne McCray, USA Today Bestseller *
A can't put down masterpiece that's sexy-hot and a thrill-ride on every page. I'm officially addicted to the series. Marry me, Bones! * Gena Showalter, New York Times Bestseller *
Intense, emotional, and flat-out fantastic! At Grave's End is top-notch urban fantasy from one of the hottest voices in the genre. Put Jeaniene Frost on your must-read list! * Lara Adrian, New York Times Bestseller *
`Each successive chapter in Frost's exceptional Night Huntress series adds more complexity, death-defying action and fiery romance. While expertly deepening Cat and Bones' love story, Frost also keeps the plot revelations absorbing and the jeopardy remorseless. In an increasingly rich and vibrant genre, she continues to prove she's a star!' * Romantic Times *
At Grave's End is definitely the best book in the series so far and is a must-read for vampire fantasy and romance fans. * Love Vampires *
Another exciting and fun adventure, At Grave's End is a thrilling addition to a well-told series. * Romance Reviews Today *
At Grave's End blends strong love, life's temptations and dark magic into an urban fantasy that will have fans thoroughly engrossed. * Darque Reviews *

Jeaniene Frost is the author of the dark fantasy Night Huntress series. A long-time vampire aficionado, she currently lives in Florida with her husband and dog.

GOR002656347
At Grave's End: A Night Huntress Novel by Jeaniene Frost
Jeaniene Frost
NIGHT HUNTRESS
Used - Very Good
Paperback
Orion Publishing Co
2010-06-10
352
0575093803
9780575093805
N/A
Book picture is for illustrative purposes only, actual binding, cover or edition may vary.
This is a used book - there is no escaping the fact it has been read by someone else and it will show signs of wear and previous use. Overall we expect it to be in very good condition, but if you are not entirely satisfied please get in touch with us.