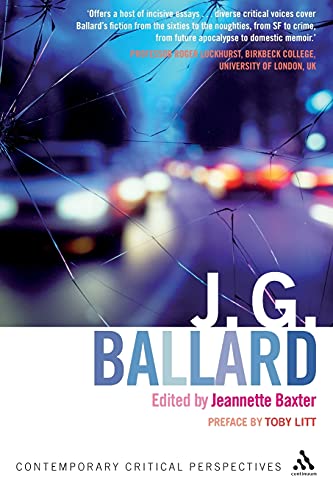 Used Price
$45.99
inc. GST
Free Shipping in Australia
JG Ballard is one of the most significant British writers of the contemporary period. This guide includes critical perspectives on Ballard's major novels as well as his short stories and journalistic writing covering issues of form, narrative and experimentation.
Reviews:
Trustpilot
Very Good

This is an up-to-date reader of critical essays on J. G. Ballard by leading international academics, which includes a short biography, timeline and comprehensive guided further reading.J.G. Ballard is one of the most significant British writers of the contemporary period. His award-winning novels are widely studied and read, yet the appeal of Ballard's idiosyncratic, and often controversial, imagination is such that his work also enjoys something of a cult status with the reading public. The hugely successful cinematic adaptations of "Empire of the Sun" (Spielberg, 1987) and "Crash" (Cronenberg, 1996) further confirm Ballard's unique place within the literary, cultural and popular imaginations.This guide includes new critical perspectives on Ballard's major novels as well as his short stories and journalistic writing covering issues of form, narrative and experimentation. Whilst offering fresh readings of dominant and recurring themes in Ballard's writing, including history, sexuality, violence, consumer capitalism, and urban space, the contributors also explore Ballard's contribution to major contemporary debates including those surrounding post 9/11 politics, terrorism, neo-imperialism, science, morality and ethics."Guides in the Contemporary Critical Perspectives" series provide companions to reading and studying major contemporary authors. Each guide includes new critical essays combining textual readings, cultural analysis and discussion of key critical and theoretical issues in a clear, accessible style. They also include a preface by a major contemporary writer, a new interview with the author, discussion of film and TV adaptation and guidance on further reading.

... brings together a wonderful range of critical perspectives on Ballard.
"The extraordinary fictions of J. G. Ballard, so long overlooked by the academy, are finally beginning to get the academic criticism they deserve. This collection offers a host of incisive essays, sandwiched between Toby Litt's meditations on Ballard's work and an interview with Ballard himself, who cheerfully announces the arrival of a new Dark Age -- by fax, weirdly enough. In between, diverse critical voices cover Ballard's fiction from the sixties to the noughties, from SF to crime, from future apocalypse to domestic memoir. A very worthy addition to the scholarship of one of the post-war era's most important writers."- Professor Roger Luckhurst, Birkbeck College, University of London.
"J. G. Ballard: Contemporary Critical Perspectives may be the most critically capacious and insightful volume yet devoted to this sui generis author whose work spans the past half-century. It is the ideal companion for scholars and teachers of Ballard's endlessly intriguing, evolving, challenging, controversial fictions.'- Professor Brian W. Shaffer, Rhodes College, USA

GOR005797972
J.G.Ballard: Contemporary Critical Perspectives by Jeannette Baxter
Jeannette Baxter
Continuum Critical Perspectives
Used - Very Good
Paperback
Bloomsbury Publishing PLC
2009-02-12
192
0826497268
9780826497260
N/A
Book picture is for illustrative purposes only, actual binding, cover or edition may vary.
This is a used book - there is no escaping the fact it has been read by someone else and it will show signs of wear and previous use. Overall we expect it to be in very good condition, but if you are not entirely satisfied please get in touch with us.