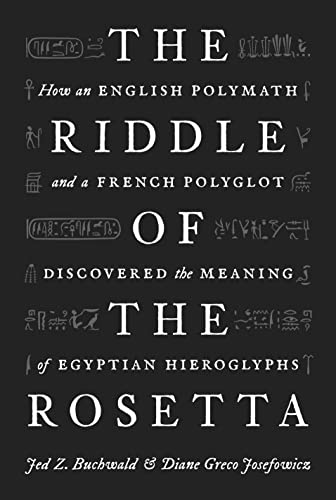 The Riddle of the Rosetta
by Jed Z. Buchwald

The Riddle of the Rosetta Summary

The Riddle of the Rosetta: How an English Polymath and a French Polyglot Discovered the Meaning of Egyptian Hieroglyphs by Jed Z. Buchwald

A major new history of the race between two geniuses to decipher ancient Egyptian hieroglyphs, set against the backdrop of nineteenth-century Europe

In 1799, a French Army officer was rebuilding the defenses of a fort on the banks of the Nile when he discovered an ancient stele fragment bearing a decree inscribed in three different scripts. So begins one of the most familiar tales in Egyptology-that of the Rosetta Stone and the decipherment of Egyptian hieroglyphs. This book draws on fresh archival evidence to provide a major new account of how the English polymath Thomas Young and the French philologist Jean-Francois Champollion vied to be the first to solve the riddle of the Rosetta.

Jed Buchwald and Diane Greco Josefowicz bring to life a bygone age of intellectual adventure. Much more than a decoding exercise centered on a single artifact, the race to decipher the Rosetta Stone reflected broader disputes about language, historical evidence, biblical truth, and the value of classical learning. Buchwald and Josefowicz paint compelling portraits of Young and Champollion, two gifted intellects with altogether different motivations. Young disdained Egyptian culture and saw Egyptian writing as a means to greater knowledge about Greco-Roman antiquity. Champollion, swept up in the political chaos of Restoration France and fiercely opposed to the scholars aligned with throne and altar, admired ancient Egypt and was prepared to upend conventional wisdom to solve the mystery of the hieroglyphs.

Taking readers from the hushed lecture rooms of the Institut de France to the windswept monuments of the Valley of the Kings, The Riddle of the Rosetta reveals the untold story behind one of the nineteenth century's most thrilling discoveries.

Customer Reviews - The Riddle of the Rosetta

The Riddle of the Rosetta Reviews

"Rarely have I seen the false starts and blind alleys, firm beliefs and 180-degree recalibrations, exhilaration and loneliness of pioneering thought captured so well. . . . If The Riddle of the Rosetta won't be coming to screens anytime soon, its achievement is no less admirable."---Maxwell Carter, Wall Street Journal
"A gloriously detailed reconstruction . . . this past intellectual world is dazzlingly brought to life by Buchwald and Josefowicz."---Dmitri Levitin, Times Literary Supplement
"This valuable analysis . . . combines exhaustive excavation of archives with eclectic biographical elements on the decoders."---Andrew Robinson, Nature
"Buchwald, a historian at California Institute of Technology, and writer Josefowicz put a decade's worth of work into this book, and it shows. . . . Buchwald and Josefowicz deliver an account that sometimes seems as if in real time, describing the blind alleys, intuitions, and thorny debates that surrounded the scholars' investigations. . . . Fans of Egyptology, cryptography, and languages will enjoy this exploration of the ancient past." * Kirkus Reviews *
"Arguably the most meticulous and thoroughgoing account of the work of Young and Champollion. . . . The dazzling scholarly nimbleness of Champollion and Young is richly illustrated throughout the book - that is no myth, but it emerges as something a little more human."---Elizabeth Frood, The Spectator
"Combining exhaustive excavation of British and French archives with eclectic biographical elements, [this] valuable new book explains in unique detail . . . the twists and turns behind the perpetually fascinating decipherment."---Andrew Robinson, British Museum Magazine

Jed Z. Buchwald is the Doris and Henry Dreyfuss Professor of History at the California Institute of Technology. He lives in Altadena, California. Diane Greco Josefowicz is a writer, editor, and activist. She has served for more than a decade as science and technology editor for the Victorian Web (victorianweb.org). She lives in Providence, Rhode Island. Buchwald and Josefowicz are the authors of The Zodiac of Paris: How an Improbable Controversy over an Ancient Egyptian Artifact Provoked a Modern Debate between Religion and Science (Princeton). Twitter @dianegreco

GOR011100647
The Riddle of the Rosetta: How an English Polymath and a French Polyglot Discovered the Meaning of Egyptian Hieroglyphs by Jed Z. Buchwald
Jed Z. Buchwald
Used - Very Good
Hardback
Princeton University Press
2020-09-15
576
0691200904
9780691200903
N/A
Book picture is for illustrative purposes only, actual binding, cover or edition may vary.
This is a used book - there is no escaping the fact it has been read by someone else and it will show signs of wear and previous use. Overall we expect it to be in very good condition, but if you are not entirely satisfied please get in touch with us.