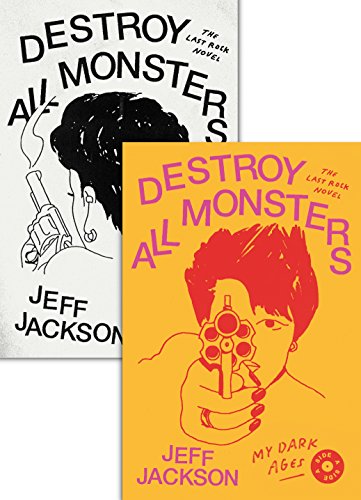 Destroy All Monsters by Jeff Jackson

Destroy All Monsters: The Last Rock Novel by Jeff Jackson

An epidemic of violence is sweeping the country: musicians are being murdered onstage in the middle of their sets by members of their audience. Are these random copycat killings, or is something more sinister at work? Has music itself become corrupted in a culture where everything is available, everybody is a 'creative,' and attention spans have dwindled to nothing? With its cast of ambitious bands, yearning fans, and enigmatic killers, Destroy All Monsters tells a haunted and romantic story of overdue endings and unlikely beginnings that will resonate with anybody who's ever loved rock and roll. Like a classic vinyl single, Destroy All Monsters has two sides, which can be read in either order. At the heart of Side A, "My Dark Ages," is Xenie, a young woman who is repulsed by the violence of the epidemic but who still finds herself drawn deeper into the mystery. Side B, 'Kill City,' follows an alternate history, featuring familiar characters in surprising roles, and burrows deeper into the methods and motivations of the murderers.

"The scenes of carnage, every one presented plainly, without pumped-up adjectives and gory effects, are absolutely devastating." --Greil Marcus, Rolling Stone

"[Jeff] Jackson captures the dynamics of a small-town rock scene and channels the sense of danger that threatens live music, at a time when tragedy strikes those who seek out the sounds they love. This surreal novel summons feelings both hopeful and terrifying, which seems about right for 2018." --Tobias Carroll, Pitchfork

"[Jeff] Jackson builds an anxious, deeply felt narrative probing a nationwide epidemic of murders of musicians . . . Infected with this eerie conceit, and expressed through gritty, sharp prose, [Destroy All Monsters] provides both deep character exploration and a nuanced commentary on music, creativity, and violence." --Publishers Weekly

"Destroy All Monsters rails against its own titular notion--it's better to create than destroy. Its sharded optimism is a balm for these increasingly fractious times." --Michael T. Fournier, The Chicago Review of Books

"[Destroy All Monsters] is about you and me. It's about the time we live in, the times our ancestors lived in. It's about music. It's about burning your house down. It's about facing the gun and being behind it . . . a masterful work by someone I'd dare to call one of the greatest living authors." --Kelby Losack, Vol. 1 Brooklyn

"Destroy All Monsters is an inventive and powerful book, one of the best (if not the best) rock 'n roll novels I have ever read." --David Gutowski, Largehearted Boy

"Being an outsider is not the exclusive realm of contrarians, as anyone who has ever longed to be a cool kid can attest. Destroy All Monsters taps into this fundamental aspect of the human experience . . . Jackson paints in sepia tones, his words [creating] a filmy, nicotine-stained haze . . ." --Michael J. Solender, PANK

Jeff Jackson is the author of Mira Corpora, a finalist for the Los Angeles Times Book Prize. His short fiction has appeared in Guernica, Vice, and The Collagist, and five of his plays have been produced by the Obie Award-winning Collapsable Giraffe theater company in New York City.
CIN000480911
Destroy All Monsters: The Last Rock Novel by Jeff Jackson
Jeff Jackson
Used - Very Good
Paperback
Farrar, Straus & Giroux Inc
2018-10-16
384
0374537666
9780374537661
N/A
Book picture is for illustrative purposes only, actual binding, cover or edition may vary.
This is a used book - there is no escaping the fact it has been read by someone else and it will show signs of wear and previous use. Overall we expect it to be in very good condition, but if you are not entirely satisfied please get in touch with us
Trustpilot