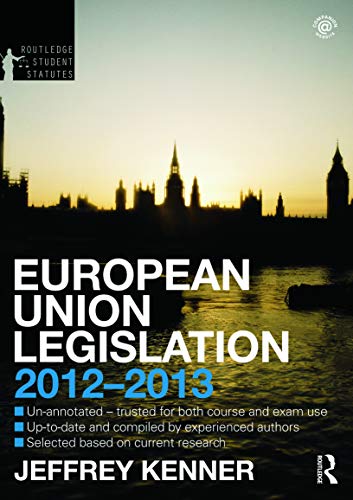 `Focused content, layout and price - Routledge competes and wins in relation to all of these factors' - Craig Lind, University of Sussex, UK

Routledge Student Statutes present all the legislation students need in one easy-to-use volume. Developed in response to feedback from lecturers and students, this book offer a fully up-to-date, comprehensive, and clearly presented collection of legislation - ideal for LLB and GDL course and exam use.

Routledge Student Statutes are:
* Exam Friendly: un-annotated and conforming to exam regulations
* Tailored to fit your course: 80% of lecturers we surveyed agree that Routledge Student Statutes match their course and cover the relevant legislation
* Trustworthy: Routledge Student Statutes are compiled by subject experts, updated annually and have been developed to meet student needs through extensive market research
* Easy to use: a clear text design, comprehensive table of contents, multiple indexes and highlighted amendments to the law make these books the most student-friendly Statutes on the market Competitively Priced: Routledge Student Statutes offer content and usability rated as good or better than our major competitor, but at a more competitive price
* Supported by a Companion Website: presenting scenario questions for interpreting Statutes, annotated web links, and multiple-choice questions, these resources are designed to help students to be confident and prepared.

Jeff Kenner is Professor of European Law at the University of Nottingham.

GOR004801605
European Union Legislation by Jeff Kenner (University of Nottingham, UK)
Jeff Kenner (University of Nottingham, UK)
Routledge Student Statutes
Used - Very Good
Paperback
Taylor & Francis Ltd
2012-08-17
688
0415633869
9780415633864
N/A
Book picture is for illustrative purposes only, actual binding, cover or edition may vary.
This is a used book - there is no escaping the fact it has been read by someone else and it will show signs of wear and previous use. Overall we expect it to be in very good condition, but if you are not entirely satisfied please get in touch with us.