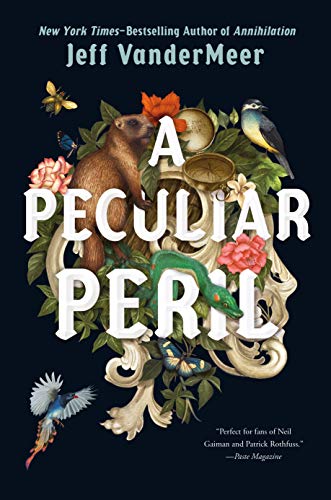 A Peculiar Peril
by Jeff Vandermeer

In Stock
$27.49
inc. GST
The first book in a new YA fantasy duology from a bestselling genre-expanding master, about a teenager who embarks on a quest to protect the world from an alternate universe where magic abounds and history has been rewritten.
Very Good
Only 1 left

A Peculiar Peril by Jeff Vandermeer

After Jonathan Lambshead's elusive grandfather dies, the recently orphaned teenager inherits the family mansion - and its contents. Jonathan soon discovers that the mansion's basement holds more than just oddities: three doors serve as portals, with one leading to an alt-Earth called Aurora, where magic abounds, history has been re-written, and an occult dictator called Aleister Crowley leads an army pillaging alt-Europe. Jonathan learns of his destiny as a member of The Order, a secret society devoted to keeping our world separate from Aurora, and embarks on an epic quest to protect Earth from Crowley's dark magic. Over the course of the duology, Jonathan uncovers more of the worlds outside of our own, the magic that permeates them, his own destiny, and the secrets buried in his family history.

A People Magazine Best Books to Read This Summer 2020

"Taking the peculiar darkness of Ransom Riggs' Miss Peregrine series and the absurd humor and wit of Terry Pratchett, VanderMeer dreams up a wholly original tale, filled with complexity, imagination, and talking marmots. . . .A wild ride that requires a few leaps of faith from readers, but they're in good hands with VanderMeer, who has a sequel in the works for those who emerge victorious from Aurora." --Booklist, starred review

A heck of a lot of fun. . . New readers young and old will find VanderMeer's foray into fresh territory a welcome port of entry to a wildly imaginative universe --The New York Times Book Review

Even for an author known for creating some of the most memorable and important worlds in contemporary fiction, his newest journey into the alt-Earth known as Aurora is remarkable. . .A truly engrossing adventure. --The Chicago Review of Books

Jeff Vandermeer grew up in the Fiji Islands and now lives in Tallahassee, Florida. His acclaimed Southern Reach trilogy has been translated into more than thirty-five languages. He also wrote the writing guide Wonderbook and helps run the teen science-fiction/fantasy writing camp Shared Worlds. A Peculiar Peril, the opening volume of the Misadventures of Jonathan Lambshead duology is his first novel for young adults.

GOR010730514
A Peculiar Peril by Jeff Vandermeer
Jeff Vandermeer
The Misadventures of Jonathan Lambshead
Used - Very Good
Hardback
Farrar, Straus & Giroux Inc
2020-07-22
656
0374308861
9780374308865
N/A
Book picture is for illustrative purposes only, actual binding, cover or edition may vary.
This is a used book - there is no escaping the fact it has been read by someone else and it will show signs of wear and previous use. Overall we expect it to be in very good condition, but if you are not entirely satisfied please get in touch with us.