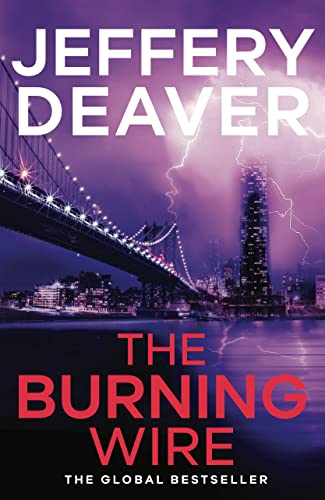 The Burning Wire
by Jeffery Deaver

In Stock
$15.49
inc. GST
A new killer and an old nemesis is a lot for Lincoln Rhyme to handle in this electrifying thriller, the ninth in Jeffery Deaver's bestselling series.
Very Good Good
13 in stock

Lincoln Rhyme must contend with a new killer and an old nemesis.

'The best psychological thriller writer around' - The Times

New York City is being held to ransom.
Manhattan's electricity grid is being used to murder people... and more attacks are planned.

While the FBI and Homeland Security struggle to determine who's behind the carnage, Lincoln Rhyme and Amelia Sachs race to decode the forensics in order to prevent the next assault.

But all is not what it seems. Lincoln Rhyme soon finds he's up against a merciless killer with a unique weapon - one that can be found in everyone's home and office.

What's more, one of the few criminals to have ever slipped Rhyme's net is back in operation. Working in Mexico, the deadly assassin known as the Watchmaker has set his murderous sights on more innocent victims, whose identities are as yet unknown ...

Lincoln Rhyme must race against the clock, juggling the two investigations, as they hurtle headlong toward their deadly outcomes.

The ninth instalment of the electrifyingly thrilling Lincoln Rhyme series.

Another corker . . . precision-engineered to keep the reader turning the pages without a hitch * Evening Standard on THE BROKEN WINDOW *
One of the great detective teams of contemporary crime fiction come storming back . . . Deaver never disappoints, and this novel shines * Mark Timlin in Independent on Sunday on THE BROKEN WINDOW *
The best psychological thriller writer around * The Times *
The most creative, skilled and intriguing thriller writer in the world . . . [Deaver] has produced a stunning series of bestsellers with unique characterisation, intelligent characters, beguiling plots and double-barrelled and sometimes triple-barrelled solutions. * Daily Telegraph *

GOR002554025
The Burning Wire: Lincoln Rhyme Book 9 by Jeffery Deaver
Jeffery Deaver
Lincoln Rhyme Thrillers
Used - Very Good
Paperback
Hodder & Stoughton General Division
2011-02-01
480
0340937300
9780340937303
N/A
Book picture is for illustrative purposes only, actual binding, cover or edition may vary.
This is a used book - there is no escaping the fact it has been read by someone else and it will show signs of wear and previous use. Overall we expect it to be in very good condition, but if you are not entirely satisfied please get in touch with us.