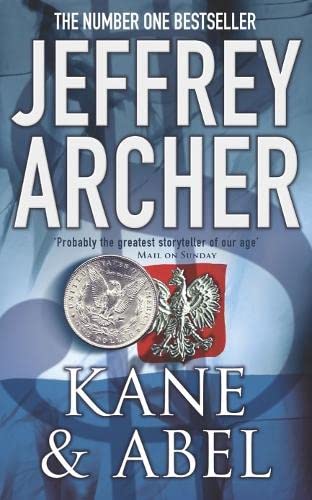 Kane and Abel
by Jeffrey Archer

In Stock
$18.49
inc. GST
The compulsive classic from the Number One bestselling author, reissued with a new cover
Like New Very Good Good Well Read
Only 1 left

Kane and Abel by Jeffrey Archer

They had only one thing in common . . . William Lowell Kane and Abel Rosnovski, one the son of a Boston millionaire, the other a penniless Polish immigrant - two men born on the same day on opposite sides of the world, their paths destined to cross in the ruthless struggle to build a fortune.

The marvellous story, spanning sixty years, of two powerful men linked by an all-consuming hatred, brought together by fate to save . . . and finally destroy . . . each other.

'Probably the greatest storyteller of our age' Mail on Sunday

Jeffrey Archer, whose novels and short stories include Kane and Abel, A Prisoner of Birth and Cat O' Nine Tales, has topped the bestseller lists around the world, with sales of over 275 million copies. He is the only author ever to have been a number one bestseller in fiction (nineteen times), short stories (four times) and non-fiction (The Prison Diaries). The author is married to Dame Mary Archer, and they have two sons and two grandsons.

GOR008721425
Kane and Abel by Jeffrey Archer
Jeffrey Archer
Used - Like New
Paperback
Pan Macmillan
2003-07-04
560
033041898X
9780330418980
Short-listed for BBC Big Read Top 100 2003
Book picture is for illustrative purposes only, actual binding, cover or edition may vary.
This is a used book - there is no escaping the fact it has been read by someone else and it will show signs of wear and previous use. Overall we expect it to be in very good condition, but if you are not entirely satisfied please get in touch with us.