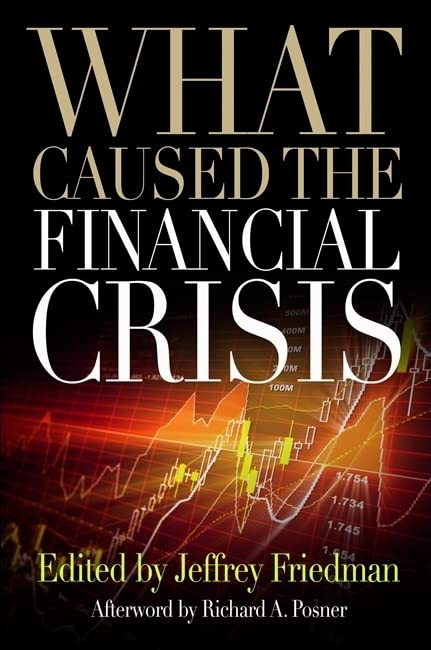 What Caused the Financial Crisis
by Jeffrey Friedman

Featuring essays by Nobel laureate economists and an afterword by Richard Posner, this volume provides a comprehensive overview of the collapse of the global financial sector in 2008. It will be essential reading for anyone interested in the nature of modern capitalism and regulation.

What Caused the Financial Crisis Summary

What Caused the Financial Crisis by Jeffrey Friedman

The deflation of the subprime mortgage bubble in 2006-7 is widely agreed to have been the immediate cause of the collapse of the financial sector in 2008. Consequently, one might think that uncovering the origins of subprime lending would make the root causes of the crisis obvious. That is essentially where public debate about the causes of the crisis began-and ended-in the month following the bankruptcy of Lehman Brothers and the 502-point fall in the Dow Jones Industrial Average in mid-September 2008. However, the subprime housing bubble is just one piece of the puzzle. Asset bubbles inflate and burst frequently, but severe worldwide recessions are rare. What was different this time?

In What Caused the Financial Crisis leading economists and scholars delve into the major causes of the worst financial collapse since the Great Depression and, together, present a comprehensive picture of the factors that led to it. One essay examines the role of government regulation in expanding home ownership through mortgage subsidies for impoverished borrowers, encouraging the subprime housing bubble. Another explores how banks were able to securitize mortgages by manipulating criteria used for bond ratings. How this led to inaccurate risk assessments that could not be covered by sufficient capital reserves mandated under the Basel accords is made clear in a third essay. Other essays identify monetary policy in the United States and Europe, corporate pay structures, credit-default swaps, banks' leverage, and financial deregulation as possible causes of the crisis.

With contributions from Richard A. Posner, Vernon L. Smith, Joseph E. Stiglitz, and John B. Taylor, among others, What Caused the Financial Crisis provides a cogent, comprehensive, and credible explanation of why the crisis happened. It will be an essential resource for scholars and students of finance, economics, history, law, political science, and sociology, as well as others interested in the financial crisis and the nature of modern capitalism and regulation.

What Caused the Financial Crisis Reviews

"You will find in this collection some of the best efforts so far to understand the financial crisis."-Edmund Phelps, Columbia University

Jeffrey Friedman is a visiting scholar in the Department of Government at the University of Texas, Austin and Max Weber Senior Fellow at the Institute for Advancement of the Social Sciences, Boston University. He is the editor of Critical Review.

PART II. WHAT WENT WRONG (AND WHAT DIDN'T)?
4. The Anatomy of a Murder: Who Killed the American Economy?
-Joseph E. Stiglitz
5. Monetary Policy, Economic Policy, and the Financial Crisis: An Empirical Analysis of What Went Wrong
-John B. Taylor
6. Housing Initiatives and Other Policy Factors
-Peter J. Wallison
7. How Securitization Concentrated Risk in the Financial Sector
-Viral V. Acharya and Matthew Richardson
8. A Regulated Meltdown: The Basel Rules and Banks' Leverage
-Juliusz Jablecki and Mateusz Machaj
9. The Credit-Rating Agencies and the Subprime Debacle
-Lawrence J. White
10. Credit-Default Swaps and the Crisis
Peter J. Wallison

Afterword: The Causes of the Financial Crisis
-Richard A. Posner

GOR009980526
What Caused the Financial Crisis by Jeffrey Friedman
Jeffrey Friedman
Used - Very Good
Paperback
University of Pennsylvania Press
2010-12-13
376
0812221184
9780812221183
N/A
Book picture is for illustrative purposes only, actual binding, cover or edition may vary.
This is a used book - there is no escaping the fact it has been read by someone else and it will show signs of wear and previous use. Overall we expect it to be in very good condition, but if you are not entirely satisfied please get in touch with us.