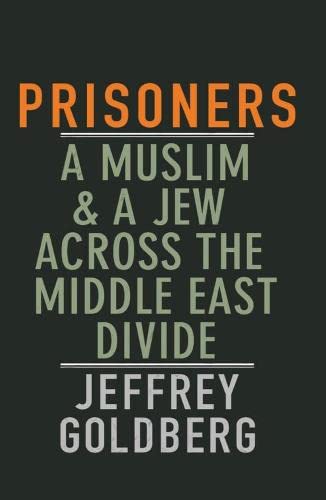 In Stock
$11.49
+10% GST
The story of an American Jew and a Palestinian who forge a friendship out of what appear to be irreconcilable differences.
Very Good Good
Only 2 left

Prisoners: A Muslim and a Jew Across the Middle East Divide by Jeffrey Goldberg

Jeffrey Goldberg moved from Long Island to Israel while still a college student. In the middle of the first Palestinian uprising in 1990, the Israeli army sent him to serve as a prison guard at Ketziot, the largest jail in the Middle East. Realizing that among the prisoners were the future leaders of Palestine, and that this was a unique opportunity to learn from them about themselves, he began an extended dialogue with a prisoner named Rafiq.

This is an account of life in that harsh desert prison and of that dialogue - the accusations, explanations, fears, prejudices and aspirations each man expressed - which continues to this day. We see how their discussion deepened over the years as Goldberg returned to the States, to Washington, DC, where Rafiq coincidentally became a graduate student, and the political landscape of the Middle East changed. And we see, again and again, how their willingness to confront religious, cultural, and political differences made possible what both could finally acknowledge to be a true, if necessarily tenuous, friendship.

Prisoners is a remarkable book: spare, impassioned, energetic, and unstinting in its candour about both the darkness and the hope buried within the animosities of the Middle East.

"Revelatory." --"The New York Times" "Fascinating, hilarious, terrifying. . . . The journey is riveting and well-wrought in a book that makes clear the confusing mess that is the Palestinian-Israeli conflict."--"The Chicago Tribune" "Sensitive, forthright and perceptive . . . . A forceful reminder of how rewarding, and how difficult, discourse between Israelis and Palestinians can be."--"The Washington Post" "Sharply observed and beautifully written. . . . A bracingly clear-eyed, deeply emotional and often humorous account. . . . "Prisoners" offers no easy answers but manages to inspire the rarest of commodities in the Middle East: hope." --"Los Angeles Times"

Jeffrey Goldberg was Middle East correspondent and Washington correspondent for the New Yorker. He is currently, succeeding James Bennet, editor-in-chief of the The Atlantic. He won the National Magazine Award for Reporting in 2003 for his coverage of terrorism. He is also the recipient of the Daniel Pearl Prize and an Overseas Press Club award for human rights reporting. He has also written for the New York Times magazine, the Jerusalem Post, and the Forward. He lives with his family in Washington, D.C.

GOR002001047
Prisoners: A Muslim and a Jew Across the Middle East Divide by Jeffrey Goldberg
Jeffrey Goldberg
Used - Very Good
Hardback
Pan Macmillan
2007-04-06
4
0330488201
9780330488204
N/A
Book picture is for illustrative purposes only, actual binding, cover or edition may vary.
This is a used book - there is no escaping the fact it has been read by someone else and it will show signs of wear and previous use. Overall we expect it to be in very good condition, but if you are not entirely satisfied please get in touch with us.